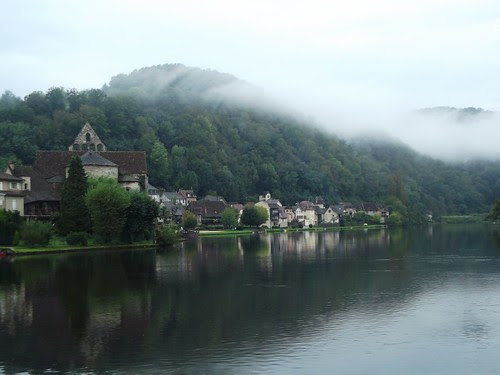 it was a misty and wet morning!, a photo by rajmarshall on Flickr.

We've just returned from a walking holiday in the Dordogne. As so often in the past few years one arranged by Inntravel. We made the trip to Beaulieu by train with a stop in Paris overnight and a few tourist sights and then after a dinner at the Velouté in Beaulieu awoke to this view of the Dordogne. The photo album for the week is mostly uploaded and accessible here. The trail followed, mostly, the pilgrim trail from Rocamadour to Santiago de Compostela - though in the reverse direction! Hopefully further accounts of the individual days will follow!

There's a few mentions of the composer Francis Poulenc in my entries on this walk but I hadn't realised that he wrote his clandestine cantata Figure Humaine whilst staying in Beaulieu - he rented a two room apartment here containing a poor piano during 1943 whilst setting poems by Paul Eluard with the final hymn to Liberty.