This week's free word associations from Unconscious mutterings are:
Posted by rajm at 7:42 am No comments:

After a time beneath the cedar he had ceased to be inhibited by Sonia's presence. In fact, there was something he took from her that he found also in her brother: a sense of uncritical encouragement.

Like last week - well what do you expect, it is 600+ pages long! - an extract from Sebastian Faulks' Human Traces.
Posted by rajm at 8:21 pm 2 comments:

Lilies after the rain 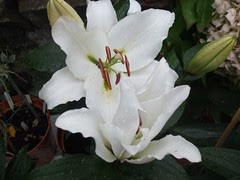 Lilies after the rain
Originally uploaded by rajmarshall
The garden continues to blossom especially after all the rain we've had this month! Here's the white lilies which have just opened, there's a couple more pictures on flickr (click on the picture - and see the adjacent images)
Posted by rajm at 11:54 am No comments:

Jacques sat don next to Oliver and took his washed hands between his own. The surge of adult confidence he had felt with Tante Mathilde had now deserted him; he was like a child again.

The results for the Bulwer-Lytton 2010 contest are up - it's a competition for the worst opening sentence of a novel (you only have to produce the sentence not the rest of the work). I think my favourite of the quoted ones was:

The dark, drafty old house was lopsided and decrepit, leaning in on itself, the way an aging possum carrying a very heavy, overcooked drumstick in his mouth might list to one side if he were also favoring a torn Achilles tendon, assuming possums have them.

This week's free word associations from Unconscious mutterings are:
Posted by rajm at 7:29 am 2 comments:


Emil Gilels playing the Bach/Siloti prelude in B minor. Rapt simplicity - but it is not easy!!
Posted by rajm at 5:42 pm No comments:

Looking down from the rail, I noticed the streets near the docks were lined with what seemed to be black perambulators, some kind of mobile coal scuttle, I assumed, used for bunkering ships. Later I learned that these were British cars (all made pre-war), a species I had never seen before.

JG Ballard returns from a childhood in China to post-war Britain, and isn't very keen. From his autobiography Miracles of Life visionary and life-affirming! - if you know his early work and Empire of the Sun (his fictionalised version of the early part of his life there may not be many new insights but Ballard is always worth the read.
Posted by rajm at 7:57 pm 4 comments:

Must have been dictated down a bad phone line with no proofreading? Here's a scan with the offending text beneath the image of the cd. I have the Tenebrae cd of the Poulenc 'Figure Humaine', which is wonderful, so it is a shame their advertising doesn't match the content.
Typed this blog entry very carefully (I hope!!) - but I expect someone will now tell me that the Orthadox church exists and it has theologions!
Posted by rajm at 5:09 pm No comments:

I was on the first téléphérique down to Winkermatten next morning, waiting patiently for the Zermatt Co-op to open to buy shampoo. At the baker's I picked up three almond croissants for our treat - I did not have enough cash for four.

Alison Hargreaves matter of fact celebration on her way back to the campsite after her solo ascent of the North face of the Matterhorn - just one of the 6 North Faces she was to solo that year.
Posted by rajm at 1:58 am No comments:

A few weeks ago we attended a double bill at the Buxton festival of Luciano Berio's Recital I and George Benjamin's Little Hill. I'd never been to the Buxton Opera House before, it's a lovely little building a bit cramped but fits very nicely with that era of spas and opera going.
I don't think I'd heard the Berio work before - maybe performed on the radio by Cathy Berberian back in the 70's(?) - it was written for her in 1972 -as the preliminary write up said it is rarely heard - and a real tour-de-force by the soloist. The work tells of the reaction of the singer as she reacts to the events around a recital, her accompanist not turning up. The singer is instructed to include some works from her repertoire - so a typical Berio-ish 60's pastiche but moving in its portrayal of someone attempting to find her voice. Susan Bickley brought over the inner struggle of the performer wonderfully.
I'd not heard the Benjamin work before but I loved the sound world he conjoured up, the strings forming most of the sound. A retelling of the story of the pied piper. More than a dash of political corruption! Here's a review of the double bill from Snape.
Posted by rajm at 7:40 am No comments:

This week's free word associations from Unconscious mutterings are:
Hmmm, only 14 posts on this weblog last month - it was June 2007 when the traffic was last that low - I hope things will improve this month!
Posted by rajm at 8:04 am No comments: