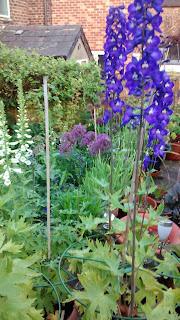 St Michael's Macclesfield is running an Open Garden event on 5/6 July this year in aid of the `Raising the Roof' fund. As part of that our (well Beth's) garden will be open - you can find the full list of gardens (as a pdf) here. Tickets are available on the day or you can get one from me. The photo is of our garden at the moment, no doubt things will be different in July! Hoping for good weather....

Earlier in the week I got around to updating the desktop to the new release of (K)Ubuntu 14.04 - I run the version using the KDE desktop - though I have lots of the ordinary Ubuntu packages installed too. Around 50 mins from the projected end of update the machine locked up - I was doing various other things at the time on it which may have contributed to this. No response to anything from mouse/keyboard - the sysrq magic keys had no effect either, but I was running an ssh server on the dekstop so I logged in remotely and rebooted.
When it came up again the boot screen appeared to think it was running 14.04 (rather than the previous 13.10) however at the login screen neither keyboard nor mouse got any reaction (and the ssh server wasn't running the machine hadn't registered with the router). I tried re-booting a couple of times with no effect.
I then broke into GRUB (at boot - press down the shift key) and booted the minimal 13.10 install (still there!) and ran the dkpg fix option (I previously tried minimal with 14.04 which again failed) which ran to completion. A reboot then gave me a working system!
Looking at the upgrade log file the last lines of /var/log/dist-upgrade/term.log read as follows:

Yes it stops there! I had it down as a problem with the NVIDIA graphics driver, this might suggest something else - I wasn't connected via ssh when I was running the upgrade so it wasn't a a case of the connection dying. Still puzzled but putting this here in case it helps anyone else.
The other problem I found (so far!) is that Ctrl-Space doesn't appear to do anything - I use this key combo a lot - in Emacs. So it was a bit painful, a websearch reveled that ibus was the problem so I ran ibus-setup and stopped that grabbing Ctrl-Space for 'next input method' and assigned it to a different key.
So far everything else appears to work...
Posted by rajm at 9:53 pm No comments:


'I wanted to let you in on something very serious. The pope just phoned me from the Vatican, really pissed off at you.'

from Andrea Camilleri's The Shape of Water - our book group book of the month. An Inspector Montalbano mystery - here's a review. Needless to say that wasn't the Pope....

This week's free word associations from Unconscious mutterings are:
Posted by rajm at 8:42 am No comments:


Oh, Anders! To have been sent off on a mission you were never right for. To be regarded after your death as an error of judgement

I'm in the midst of a re-read of Ann Patchett's State of Wonder. I'm not sure if I hoped that this would be our book group's book of the month - it's on the list we draw randomly from.. but I picked this book up in a charity shop last week and thought I'd enjoy owning/re-reading it. Here's my original teaser, comments and a link to the author talking about it.
Posted by rajm at 3:00 pm 2 comments:

This week's free word associations from Unconscious mutterings are:
Posted by rajm at 9:33 am No comments:

First walk of the summer season


We were the only walkers this evening so cut the walk short but not before a good view across the fields.
Posted by rajm at 8:58 pm No comments:

Teaser Tuesday
The rules are:
And a day late...

Another from The Journals of Thomas Merton 'Run to the Mountain' - a bit of a cheat as here Merton is quoting from Lorca's poem The Arrest - Prendimiento de Antoñito el Camborio - here's the whole poem. Difficult in view of the circumstances of Lorca's own death.
Posted by rajm at 2:57 pm No comments:

This week's free word associations from Unconscious mutterings are:
Posted by rajm at 7:27 am No comments:

This afternoon I reconnoitered a walk I'm hoping to lead later this month up to Nab Head. We climbed out of Bollington and came to this view over the Harrop valley. Pretty close to the view from my room when I was a teenager - though with not so many houses in the foreground!

I used to often walk up Nab Head in the 60's until the foot and mouth epidemic and the path was closed. It was only opened again after a long struggle so seeing the route again was good! It's a steep climb but not as hard as White Nancy!

Hmm that doesn't look a very good link anyone running other browser's or OS's like to comment? Try here to take you to the photo.
Posted by rajm at 7:09 pm No comments: