Another extract from Ayaan Hirsi Ali's Infidel
Gosh, 22 postings, so far, this month - that's the most since June last year
Posted by rajm at 7:15 pm No comments: 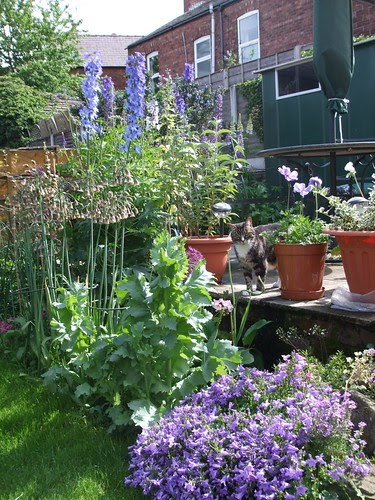 Splashes of blue, a photo by rajmarshall on Flickr.

I really was just intending to take the picture of the delphiniums - and the rest of the spread of blue flowers - but Hecate (the cat) spotted a gap in the composition of the picture and helpfully filled it!

The BBC is offering you the opportunity to submit your choice of Desert Island Discs. I used to have an informal list and thought it would be easy but I've acquired lots of musical baggage over the years and it's really hard to cut it down to just eight. Alas, Jacques Brel didn't make the final 8...though ask me next month and I guess the list would be different (also there's no [R] Strauss, no Chopin, no Beethoven, no Britten, nothing post 1965 in the following...)Thanks to Entartete Musik for pointing me to listing these choices! Lots of longing and nostalgia in the above though that's almost inevitable.
... oh and as a single choice I guess it would have to be the Schubert.
Posted by rajm at 4:46 pm No comments:

I stop, winded, the air sifting down.
Here is the peculiar light I hoped for.
The branches of the pines are lobed with snow,
each shape intact, and brightened from within.

I walked among these flickering trunks in fall,
the grass grown stiff and noisy underfoot,
and found a mystery, a tree, a flowering quince,
all pale and fragrant, out of season.

It gave off this light.
What is holy is earth's unearthliness.
Love, could we describe it,
would break apart, lucency and force.

A starling rasps from his white precinct.
Far back in the woods, the snow is falling again,
perhaps into your life. The wind returns
to chisel its drifts and ribbing.

Forgive the rounded burdens of the branches.
They do not suffer, suffused in this light.
They are not sorrows,
though that is the meaning we give them.

A little unseasonal but thoughtful and moving, from her collection Horses Where the Answers Should Have Been quoted on Carol Peter's poetry blog which is well worth a visit. (I've quoted Twichell's poetry before on this blog go and read some!)
Posted by rajm at 10:16 pm No comments:

I seem to have blogged a youtube of Pirate Jenny before, but this should make your hair stand on end!

Anne Kerry Ford making some men very, very scared - make sure you stay for the black freighter!
Posted by rajm at 10:28 pm No comments: 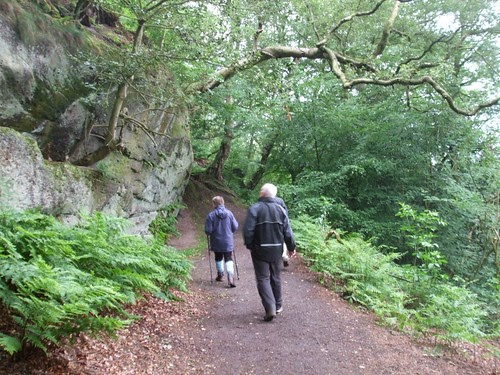 Beneath the Edge, a photo by rajmarshall on Flickr.

We got to the Alderley Edge walk this year a little earlier than planned - the leader for Thursday had double booked himself, so instead we walked from the Wiizard around the Edge, crossed the road nearly by the village and returned through the woods on that side. The Wizard serves wonderful chips and has a good wine list! More photos towards the end of this flickr set.

The Sun began to Rain

Sue blogged last weekend about the Rapture and the 70's film A Thief in the Night which used Larry Norman's song `I wish we'd all been ready', this has reminded me of this Norman number

The Sun began to Rain, fun wordplay in a little number knocked out (apparently) in a few minutes, that's Dudley Moore on the piano...
Posted by rajm at 8:31 pm No comments:

I'd previously only known Loewe as a composer with a predilection for writing pieces which start in a major key and end in the minor. However I've just noticed that a cd has been released of Loewe Ballads with a somewhat racy cover. You'll need good eyesight to see the details in the above screenshot from amazon or you can just click on the link. I was interested that the two often bought together cds had somewhat similar cover art the one with the religious music having a young lady with rather more clothing! The left hand picture seems to be crying out for a caption competition?
Meanwhile to drag your minds out of the gutter and onto higher matters, many years ago I participated in a thread in rec.music.classical on the subject of pieces written in the period 1700 to 1900 which start in a major key and end in the minor - there are surpisingly few of them, if memory serves me correctly they are:
Google groups has an archive of rec.music.classical but either it is incomplete or the search facility is currently broken (not for the first time!) - the discussion I'm looking for was in 1991 or 1992.
Not at all the list of works which you'd think of which start with optimism and end in darkness any other works you can name which fit this category I'd welcome though I see that wikipedia has a list but with no mention of Loewe (or of Bach or Heinichen) - and I've lost the list I made after going through the collected ballads in Manchester University Library!
Posted by rajm at 2:53 pm No comments:

I did know that sex was bad. Sometimes in the evenings, when I tramped with Ma through the neighborhood searching for Mahad, listeniong to her never ending complaints about the foul odor of sukumawiki, we came across people making out in alleyways.

(sukumawiki - clearly the smells of cooking). A no-nonense teaser and a no-nonsense book - Ayaan Hirsi Ali's Infidel my life growing up in a tradition Muslim environment in Somalia and all that happened afterwards - our book group book of the month.
Posted by rajm at 3:55 pm 1 comment:

The orchestration of the opening for flute, double basses and tamtam always sends a shiver down my spine. You'll find an English translation of the above - taken from the centre of this movement - here.

One of the mightiest energies, one of the most inconsiderate despotic natures, one of the most powerful spiritual potencies in our public life has departed with him. A will of unbending strength, of immovable resistance, a temperament of demonic power has destroyed the unprepossessingly weak shell.

from the Frankfurter Zeitung Obituary. Gavin Plumley has been recalling the last week of Mahler's life on his weblog.
Posted by rajm at 12:08 pm No comments:

'This is the border of Elfland,' said the Queen. 'This is a shadowland where the shadowless travel.' The rocks, and the grass were grey, and a little river that ran beside the track was grey, and the thickets they passed were grey, rat-grey, shadow-grey, and there was the sound of rushing and roaring, like breakers on the beach.

Another teaser, like last week, from A S Byatt's The Children's Book
Posted by rajm at 4:46 pm 5 comments:

This week's free word associations from Unconscious mutterings are:
Posted by rajm at 8:10 am No comments: Maybe I should record that the All Saints' Summer walks have begun. On Thursday we had a walk around the Ryles Arms near Sutton. I'm arranging next weeks walk in Wildboarclough and the route has yet to be planned!

Youlgreave re-enacted Bottom's enchanted sleep, lying on the rising mound that led to the shrubbery, whilst Dorothy, Phyllis and Florian hovered as Peaseblossom, Moth and Mustardseed. Toby was not in fancy dress apart from the papier-maché and horse-hair mask he was inside.

from A S Byatt's The Children's Book novel about creativity and its effects - this is Adam Mars-Jones review - the book is based in the England of the early years of 20th century and fairly teems with detail - I'm currently struggling to hold all the information together!
Posted by rajm at 4:06 pm No comments:

The past is not my jurisdiction

Last week there was another foreign film showing at the Macclesfield College, aka Learning Zone, El Secreto de Sus Ojos - the Secret in their eyes. Prefaced with tapas - prepared by the students - a film a glass of wine and a film for £6.50 - even in our straitened circumstances we can manage that! This is the trailer - there are English subtitles but you may need to turn them on (button at lower right).

This was the winner of this year's foreign film Oscar - here's Philip French's review from the Guardian:

The movie .. proceeds with immense narrative skill to cut between past, present, fictionalised memories, plausible conjecture and unverifiable accounts as it puts together a complex jigsaw linking private lives and troubled social currents over a period of a quarter of a century.

. Two interlocking stories of Argentina in the 1970's and now, carrying quite a punch on the themes of love and punishment. However, here's a review from someone who found it rather cliched. In the past 12 montths we've seen Michael Haneke's The White Ribbon, Jacques Audiard's A Prophet and now Campanella's Secreto de Sus Ojos from the foreign film Oscar shortlist all shown in Macclesfield.
Posted by rajm at 5:31 pm No comments:

This week's free word associations from Unconscious mutterings are:
Posted by rajm at 8:19 am No comments:

Around a week ago the latest release of Ubuntu - Natty Narwhal was released, the upgrade of Beth's desktop went pretty smoothly and so I decided to upgrade this laptop. Laptops are often a little more problematic and I had lots of extra stuff installed so I knew it wasn't going to go as smoothly!
But here I am now running the new release with the new Unity desktop:

This is a work in progress I've found a number of issues and as I resolve them I'll put the solutions (which worked for me!) here:

There's some fairly hard-core geekery in the above - thanks for sticking with the description to the end!

Diana poured out the sherry and gave a glass to Lisa who was still standing in the doorway unknotting her scarf.
'Any dramas?' Diana often asked them this question when they came home in the evening.

Another teaser from Iris Murdoch's Bruno's Dream.
Posted by rajm at 7:57 am No comments: 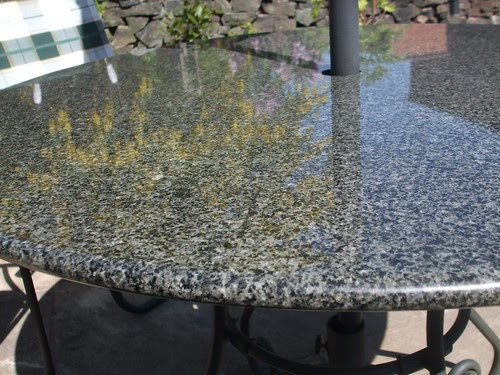 Reflections in granite, a photo by rajmarshall on Flickr.

Some friends who are leaving the area and down-sizing have kindly given us a patio table and chairs. We spent yesterday afternoon transporting them across town, 5 trips by car and one on foot. Here's the table top with a reflection of next-door's laburnum currently in full bloom. I'm hoping the weather doesn't stay too bright - it's hard to blog from the patio with all the reflections!