This week's free word associations from Unconscious mutterings are:
Posted by rajm at 8:26 am No comments:

This is no doubt deeply contrary, but here is Elly Ameling singing Schubert's "Der Hirt auf dem Felsen" (the Shepherd on the Rock)

Contrary, because on hearing of Margaret Price's death today I was looking around for her performance I was looking for a performance of this work. I've not heard it for many years, I used to have a tape of a performance by Price (I'm pretty sure) of this work as part of a 1970's concert from London consisting of Schubert and Webern (both minaturists) and ending with this gloriously sad work. Make sure you listen to part 2 - a vocal and clarinet cadenza. The words and English translation are on the youTube page.
I don't like the switches in scale of the score for when Ameling is singing, two bars at a time is far too little!
Posted by rajm at 9:12 pm No comments:

I bring this up here because there is sometimes a misunderstanding about why we enjoy certain styles of music, a belief that we relish above all the character of the sentiment, the emotional aura of the music. Yet, around 1810, when Beethoven was still very controversial, many were horrified by their first contact with his music and Goethe's friend and Mendelssohn's teacher, Georg Zelter, even described the taste for it as something like sexual perversion.

Charles Rosen trying to get to the bottom of our response to music in his Music and Sentiment - the link is to Simon Callow's review in the Guardian which is worth reading on its own account!

Eighteenth-century composers, for example, played with the relationship between dissonance and consonance, dissonance creating a tension which is then released, to gratifying effect, by a consonance. Audiences knew and expected this pattern; they weren't taught it; they simply imbibed it with the rest of the culture.

Rosen is not an easy read but it is usually worthwhile, I was introduced to his book the Classical Style (thanks Paul!) while at college, and his works are always worth the effort.
I see that the preface to this volume says:

I am deeply indebted to Robert Marshall, emeritus professor of Brandeis University

so unfortunately, I guess that's not me! I was very tempted to pick a teaser from page 36 where he quotes Robert Marshall (a Handel scholar I think, unless there's another in the field!) 'Robert Marshall has suggested to me...' but unfortunately those two sentences make around 15 lines!
The book was a Christmas present and I'm, at last, getting around to it!
Posted by rajm at 4:38 pm 4 comments:

One of these suggestions...

Whilst researching the Blue Danube performances from the previous post, I spotted that one of the YouTube suggestions appears to be rather different from the others! 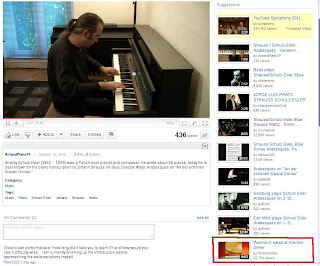 Click the image for a larger version. I hope you're grateful that I haven't linked to it.
Posted by rajm at 11:21 am 1 comment:

.. on "An der schönen blaune Donau" Here's a closeup version of the impossibilities of this fun transcription of J Strauss' Blue Danube played by Sim Keng Boon.

There are versions of this played by Lhevinne, Bolet and Wild on youtube but they don't have the video! There's also an even more close up version here played in a sitting room on an upright! That one comes in two parts but you get a very good idea of the difficulties it's a slow performance though and make it look easy - the one above is 9 minutes as against 16 - well it is just slightly difficult, make sure you stay for all of the above video!
Was this the piano transcription that Tom (of Tom and Jerry) played after 4 lessons? There doesn't appear to be a Yuja Wang performance of this around - she'd probably eat it for breakfast!
Posted by rajm at 11:10 am No comments:

This evening at the SilkScreen was Jessica Hausner's film Lourdes, starting off with a documentary feel it tells the tale of a group visit to the pilgrimage centre. Gradually you are drawn in - I felt very disengaged until well into the film but Sylvie Testud's performance as a woman with MS is mesmeric. Questions are raised as to the nature of miracle what if the miracle doesn't last and of healing in all ways. Hausner stands back and lets you see what's going on - the Guardian review refers to the miracle thus:

It is a moment of astonishment that punctures the rational fabric of the film – there is no clearly comparable sense here, but certainly a batsqueak of anxiety that the miraculous might be real, and that it is therefore just as alarming, unsettling and threatening – and perhaps, also, just as absurd and banal – as everything else in the real world.

That review also suggests irritation with the final scene - I found myself more absorbed by the tension at that moment.
Here's the trailer:

yes it's the Spanish version of the trailer, I can't find a French one or the English at the moment...if I do I'll replace it! This mini-documentary also looks worth a watch.
Posted by rajm at 10:39 pm 2 comments:

When I read those lines I quoted in my last post I was immediately reminded of this song from Mahler's Der Tambourg'sell - a drummer boy is being led to the gallows for desertion (cue lots of military style music) and bids farewell to, not only his comrades and officers, but the mountains. Here it is sung by Dietrich Fischer-Dieskau, the film isn't good but listen to the music and the final eerie darkness.

You'll find the translation in the subtitles and also here.
Posted by rajm at 4:50 pm No comments:

Farewell, you mountains which rise straight out of the water and up to the sky; you jagged, uneven peaks, which we who have grown up with you know so well, and carry impressed in our minds, like the faces of our own family. Farewell you streams, the murmur of whose voices we can tell apart like the voices of our oldest friends. White houses spread glimmering across the slope, like flocks of grazing sheep, farewell!

Cheating slightly with 3 sentences but that last one is so beautiful! Another extract from Manzoni's The Betrothed(I Promessi Sposi) - the sad end of an otherwise very funny chapter! It's a powerful illustration of the change in the Romantic attitude to nature and mountains - earlier writers would have had a fit of the vapours at a mere mention of jagged peaks! The heroine flees from her home into the unknown city to escape a fate worse than death at the hands of the novel's deep-dyed villain.
Posted by rajm at 2:37 pm 3 comments:


This blog has gone a bit quiet - too much real life, I'm hoping to get things back on track in the next few days.
Posted by rajm at 8:02 am No comments:

This week's free word associations from Unconscious mutterings are:
Posted by rajm at 8:27 am No comments:

View from the Bridge 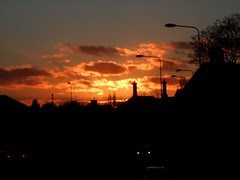 Hibel Rd at Sunset - ii
Originally uploaded by rajmarshall
Very close to our house there's a pedestrian bridge over a local small piece of dual carriageway. When I was walking over it this evening I noticed the clouds and dashed home for a camera and took this - and another picture also on flickr. I should have stayed for longer to see the light fade and the moon appear - which is now fairly close to the sun in the sky. Still I rather like this - maybe I should trim it to remove the car lights?
Posted by rajm at 8:16 pm No comments:

He knew he was on the verge of saying something lawyerish he might regret, so he stood up and breathed in deeply. 'Shall we talk about books instead?' he said.' Can I have a look at your collection? I caught a glimpse when we were coming in.'

Another piece from our book club book - Sebastian Faulks A week in December - I am mostly enjoying this though the quantity of financial detail that Faulks feels obliged to load the text with is a bit of a drag. Here's John Crace's hatchet job on the book from his Digested Read article:

John Veals gawped at Olya on the Naked Russian Babes website before planning his run on the Allied Bank and cleaning up on commodities at the same time. He wasn't at all sure anyone was that interested in the minutiae of the banking system, but Seb had told him he had done loads of research and he was buggered if he was going to waste it.

First Teaser of the year and I'm spending the New Year finishing up the books of last year, but I'll soon be onto the new!
Posted by rajm at 9:42 pm 3 comments:

This week's free word associations from Unconscious mutterings are:
Posted by rajm at 8:02 am 2 comments: 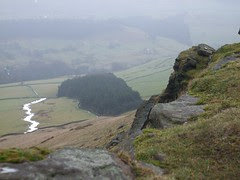 The view from the top
Originally uploaded by rajmarshall
It didn't look a good day for a walk up Shutlingsloe (or indeed anywhere up in the hills at 11am but the rain ceased and the clouds cleared and we had a swift walk up to the top - a traditional walk for All Saints Macclesfield for today. Back for welcome soup and rolls at Carol's!
The complete set of photos can be found here on flickr.
There seemed to be more ice and snow lower down than up on the summit maybe there were more sheltered spots.
Posted by rajm at 4:05 pm 2 comments: