This week's free word associations from Unconscious mutterings are:
Posted by rajm at 8:02 am No comments:


With Mary's coaching and the exercises she practised every day at home, Terri slowly felt her throat opening, lengthening and widening and the voice starting to form lower and lower in her body. It grew stronger and clearer, rounder and more beautiful.

As last week, a teaser from Jessica Duchen's Songs of Triumphant Love this is turning into a good read - I had mixed feelings at the start where it felt as if musical details were being thrown at you sometimes for effect and the same with the sexual encounters but it has found an interesting pace binding together musical careers, the breakup of Yugoslavia and British troops in Afghanistan.
Posted by rajm at 9:03 pm No comments:

This week's free word associations from Unconscious mutterings are:
Posted by rajm at 7:55 am No comments:

Georges Brassens was born 90 years ago today..
Posted by rajm at 8:24 am No comments:

'No' She was flat out underneath him at the time 'It means: "tell me, fair ladies, what is love? What is this burning, yearning, seething desire?"

Jessica Duchen's Songs of Triumphant Love - I've read most (all?) of her previous books - she's a music writer - written a biography of Fauré - all of her novels are around the theme of music - and I've enjoyed them so am looking forward to this. The quote is the main character's - an opera singer's introduction to love and the Italian language (as well as singing it!). Yes there does appear to be rather a lot of sex in this work - maybe inevitable from the title - I'm looking forward to the development of other themes! Here are the reviews on her website - the amazon ones are also pretty uniformly positive.
Posted by rajm at 7:12 pm 1 comment:

Its over a week ago now but here's a quick reaction to seeing the Sacconi Quartet perform in Bollington. Due to the job situation I've not been to the Bollington Chamber Concert series for some time - when we arrived we found that the proscenium arch has been removed and the performance area is (apparently) much closer to the audience - I gathered that this was the first of these concerts since the change - I welcomed the lack of distancing and I think audibility was better. This was apparently the quartet's 4th visit to Bollington - I'd not seen them before - so obviously they were enjoyed on their previous trips.They performed the first of the Haydn Op 77 quartets and then the Bartók Quartet No 3 - I know this well (bette rthan the Haydn) and have loved - if you can love it(!) - for many years. There appeared to be a certain nervousness and a statement that it was new to their repertoire - comfirmed later that this was the first public performance for them - even the page turns looked hairy - I've never seen it performed and the live performance showed how difficult it is - bits where I thought where all 4 instruments are playing turned out to be just 2 of them. Only just over 15 minutes but what an intense work it is. After the interval came the Schubert Death and the Maiden - far longer but it didn't seem so, the rapt silence of the audience at the end of the slow movement (the variations) showed how much the audience were involved by the performance.

They had cds available at the interval but after persuading a friend to get their Ravel/Lalo/Turina disc I then discovered that there weren't any more of that one - still I see that the Sacconi's repertoire is on emusic - I expect to be downloading...

The latest version of ubuntu was released last week and over the weekend I decided to try upgrading - this desktop was running the ealier version which had already been installed a few weeks, so I thought it would be pretty smooth as I hadn't had too much excuse for tweaking this machine! I think things are now running ok so let me highlight the issues I had:

I've not put a terragen render up in ages, and have nearly forgotten how to use it, I need a few tutorials - these might be a suitable start. This image is fairly basic but I hope to improve it... 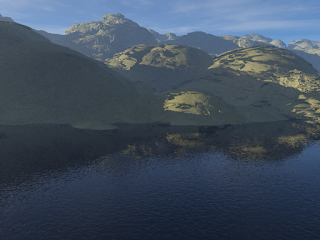 If you click on the 'terragen' label at the foot of the post you'll see that this is windows software running very nicely under linux.
Posted by rajm at 8:22 pm No comments:

Despite the weather the wild daffodil buds are showing their first pale glimmer of colour. Their country name is the Lenten Lily, because they bloom in the liturgical season of Lent.

Spring approaches - at least in Katherine Swift's The Morville Hours! Another, like last week from our book group 'book of the month'.
Posted by rajm at 7:05 pm 1 comment:

This week's free word associations from Unconscious mutterings are:
Posted by rajm at 9:04 am No comments:

On Wednesday was the second film of this season't Silkscreen - Chega de Saudade (Ballroom) of Lais Bodanzky, an affectionate study of growing old set in a São Paulo down-at-heel ballroom

I couldn't find a trailer with subtitles but this isn't the official trailer and has very little spoken dialogue! No punches pulled in its depiction of ageing and growth. Great fun! I was in charge of projection for the first time - so an apprehensive occasion - but all seems to have gone off smoothly!
Posted by rajm at 7:34 pm No comments:

Just in case someone isn't following me in other social media, here's the latest Simon's cat:

Say he is any man
anywhere set before the shop window
of life, full of comestibles
and jewels; to put out his hand
is to come against
glass; to break it is
to injure himself.

Shall he turn
poet and acquire them
in the imagination, gospeller
and extol himself for his abstention
from them?

What is he is not
called? I would put the manufacturers
there. Let them see the eyes
staring in, be splashed with the blood
of the shop-breakers; let them live
on the poet's diet, on the pocket-money
of the priest.

I see the blinds
going down in Europe, over the
whole world: the rich with everything to
sell, the poor with nothing to buy it with.

R S Thomas (Experimenting With An Amen 1986)
I'm reading this book - I'd missed out seeing this volume before and I was struck by Thomas' view of an acquisitive society. Particularly after this summer - in the UK - of riots and looting. Shall we offer pretence, a substitute for that which cannot be afforded?
Posted by rajm at 9:26 pm No comments:

My mother used to take me on retreats to Dominican abbeys, and while she was at her prayers, I - a child of eight or nine - would roam about the grounds or help the lay brother in charge of the gardens as he weeded the paths or dug the vegetable patch.
Among the books I brought with me to Morville was my mother's Dominican prayer book, containing a modern text of the Hours.

Katherine Swift's The Morville Hours - here is the Guardian review - it is our book group book of the month - only got it last night - but it looks rather good the story of a house and gardens told through the medium of the book of Hours.
Posted by rajm at 4:25 pm 1 comment: 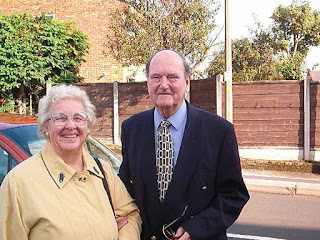 Today was the funeral service for Barabara Smith - a much loved member of All Saints Church. She gave so much of herself to so many of us - the picture shows her with her husband John who died around 6 years ago.
Posted by rajm at 4:08 pm No comments: