Here's the Archbishop of Canterbury talking (the link is to the same video on the Lambeth site with a transcript of the message) about the challenges of AIDS in 2010.

Visits to the Mildmay Hospital in Uganda and Arunima Hospice in India.
Posted by rajm at 3:49 pm No comments:

Luckily, Kitty came into the room just then. She was lugging not just the grocery bag but but a pillowcase stuffed with clothing-the pillowcase from Liam's bed, which she hadn't asked permission to take.

From Anne Tyler's Noah's Compass our BATS (book group) book of the month -I've not read any Anne Tyler before. An easy read but very thought provoking.
(I've missed 2 weeks of these - I must try to get back into the rhythm!)
Posted by rajm at 12:15 pm 5 comments:

Haven't had one of these for ages!

see more Lolcats and funny pictures.
If only extracting your money was that easy!
Posted by rajm at 8:52 pm No comments: 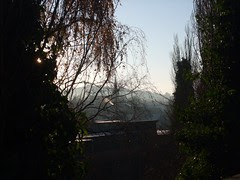 St Paul's Macclesfield
Originally uploaded by rajmarshall
I took this photo when walking across Macclesfield this morning, in very cold weather, to a morning service. And for this day a few verses from Anne Ridler's Nothing is Lost

Nothing is lost, for all in love survive.
I lay my cheek against his sleeping limbs
To feel if he is warm, and touch in him
Those children whom no shawl could warm,
no arms, no grief, no longing could revive.

Thus what we see, or know,
Is only a tiny portion, at the best,
Of the life in which we share; an iceberg's crest
Our sunlit present, our partial sense,
With deep supporting multitudes below.

This week's free word associations from Unconscious mutterings are:
Posted by rajm at 11:22 am No comments:

Spotted this meme at elizaphanian and so here is my contribution:
I've slightly edited it to keep a consistent pattern of 'Composer (where known), track name, artist, album'. There's not a lot of songs here - blame iTunes for this casting everything in pop music terms but at least the export from my music player in xspf format, which I used to compile this list, doesn't include the word 'song' as a tag! Though it also doesn't export the composer.

With all those bleeding chunks I tend to avoid random mode and use amarok's random album mode which plays a random succession of complete albums - ok with some collections you get a long sequence of different works so it is hardly random but at least you don't get 30 seconds of a longer work!
Have fun with this yourself, if you decide to use it.
Posted by rajm at 10:56 am No comments:

This week's free word associations from Unconscious mutterings are:
Posted by rajm at 11:42 am No comments:

Far too much listening

Scarily, I now seem to scrobbled (logged) 100000 tracks of my listening with last.fm 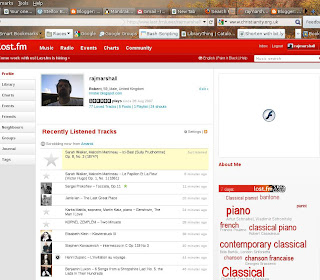 Nice piece of Fauré to mark the milestone with an interesting set of random album listening in the rest of the recent set courtesy of amarok.
If you look at the browser window - that the new appearance of firefox in the latest beta of version 4 (to be released early next year).
Nothing too embarrassing - I hope - in either the listening or the firefox tabs!
Posted by rajm at 9:12 pm No comments:

Which of these pictures... 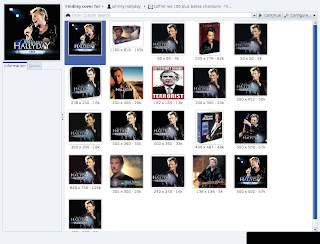 It's probably my fault for listening to music which Sarkozy enjoys. This is the amarok search screen for finding images which match the current music. But I promise to not even joke about blowing up airports.
Posted by rajm at 8:53 pm No comments:

Yunnus blushes and scowls silently. The whole situation is embarrassing. Mansur sneers. 'The granddaughter won't marry grandfather', he mumbles under his breath, so Yunus hears it but not Sultan.

More from The Bookseller of Kabul by Åsne Seierstad which I'm still reading - and enjoying.
(.. not the granddaughter's grandfather!)
Posted by rajm at 8:20 pm No comments:

However this post may have something to do with ecclesiastical politics! 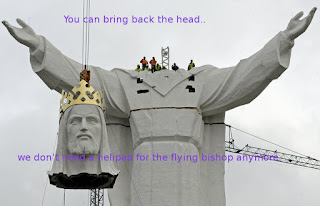 This was a caption competition today on twitter run by @shipoffoolscom and this was my contribution.
Posted by rajm at 8:11 pm 1 comment:

No, nothing to do with women and peripatetic bishops, this is part of Act 3 of Wagner's Die Walküre (not act 2 as the youtube notes say)

This is the Bayreuth Pierre Boulez version - I remember watching it with an entranced 5(?) year old daughter when it was first shown on the television back in the 1980's. It's one of the darkest moments Siegmund is dead, his lover Sieglinde wants only death but she is told that she is pregnant - stay for that thrilling moment. (I'm afraid there are no subtitles!)
'Oh herstes Wunder' - towards the end of this clip. There is hope even at this point, the work is wonderfully sung and visually ravishing! Gwyneth Jones and Jeannine Altmeyer.
I've just been watching a cartoon version of Die Rheingold but give me human actors anytime.
And I won't mention X-Factor.
Posted by rajm at 7:34 pm No comments:

I've not had a screenshot up here since November 2009 so here's a current one! 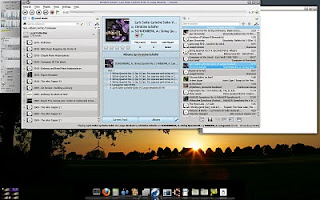 This is my laptop running ubuntu's version of fluxbox with a cairo dock at the middle bottom. Applications running are (from left) gkrellm - giving machine status, amarok - for listening to music, and a wterm - for commandy stuff.
Posted by rajm at 10:29 pm No comments:

This week's free word associations from Unconscious mutterings are:
Posted by rajm at 7:34 am No comments:

..except incest and folk singing (quotation munged slightly for the purposes of this post)

Kenneth Williams from Parkinson recreating Rambling Syd Rumpo - watch Billy Connolly collapsing in laughter! A bit of fun for Friday evening - I loved these when Round the Horne was broadcast in the 60's
Posted by rajm at 9:42 pm No comments:

Agreement is a good thing - isn't it?

Maybe being English, we think of making agreements as fundamentally good as providing channels for discussion. However when that agreement binds you into ways which lead you into different ways of communicating where the presuppositions behind the agreement only seem to want to exclude than hard questions need to be asked rather than rushing into a warm feeling that we have something new in common.
These thoughts are sparked by reading the announcement of the launch of the No Anglican Covenant Coalition - I recommend a visit!
The Church mouse on the covenant is also worth a read
Posted by rajm at 4:43 pm 1 comment:

By special request, here is the recipe for Toffee Fruit cake (also from the Scargill recipe book) - I cooked a fewof these last weekend!
Melt the margarine and sugar in a pan and allow to cool. Mix the beaten egg, essence, sultanas, cherries and when the hot sugar is cool enough (not to cook the egg!) add to the egg mixture. Then add the flour. Put in square tin and cook for 25 mins at 180C. Make sure it is cooked through before removing from the oven.
Don't put in a too small tin, it mustn't be deeper than around 1 inch or it won't set. Allow to cool and then cut into fingers - it doesn't slice well when warm.
Posted by rajm at 6:53 pm No comments:

Todd Duncan - Lost in the Stars

Todd Duncan - the creator of the role of Stephen Kumalo singing Lost in the Stars from the Kurt Weill musical - quite a change from Weill earlier more astringent Berlin works but still beautiful. Lost in the Stars is based on Alan Paton's Cry the Beloved Country - quite a bold step for the America of the 1940's

Even with their homemade weapons the guerrillas were virtually invulnerable when laying an ambush. The soldiers were everywhere, disguised as goatherds, the Kalashikov hidden under the goat's belly.

These are the Mujahedeen in the Afghanistan occupied by the Russians as described in The Bookseller of Kabul by Åsne Seierstad and exercise in getting inside the mind of a different culture - and I seem to be reading yet another book on the Middle East! I see (if you follow the above link) that the book is currently the subject of legal action by the book-seller, a court has found against Seierstad and we're now in an appeal. From the corrections to that article the sensitivity of the whole subject is obvious!
Posted by rajm at 7:13 pm 2 comments:

..and I thought I used long words..

We as Christian voters should not focus on his doctrinal flaws, egregious as they may be, but instead on how he would move our Nation forward in God's plan. If he is elected, there will be ample opportunities to heal the spiritual wounds of Mitt Romney and other Mormons. As with the Prodigal Son, we should put aside our objurgations so as to welcome back into the arms of our Nation him and his kind, who have long been lost in the riotous distant land that is the Utah of the soul.

From Pastor's Corner at Objective Ministries. Other posting tongue (and mind twisters) include - as titles:I suspect a spoof.
Posted by rajm at 6:59 pm No comments: