That was the way it was with shepherds on the telephone, though little by little, as they became more adept with it, and picked up a few of the necessary social skills, things got better, untill we finally got to a point where we could even exchange rudimentary pieces of information over the phone.
Mistakes however remianed inevitable.

I've, at last, got around to reading Chris Stewart's followup to Driving over Lemons - `A Parrot in the Pepper Tree' (that's a link to the Guardian review), I don't think I got on terribly well with his first book - which is why I didn't read the second - as Beth already had a copy of each - but after last autumn's walking in the Alpujarras I was encouraged to give this one a go - and it is certainly enjoyable. I must dig out my copy of the Genesis first lp - Chris Stewart was very briefly their drummer...

Not bad - the strings are definitely of their time but I can do without the chorus!
Posted by rajm at 9:21 pm 1 comment:

A slice of history 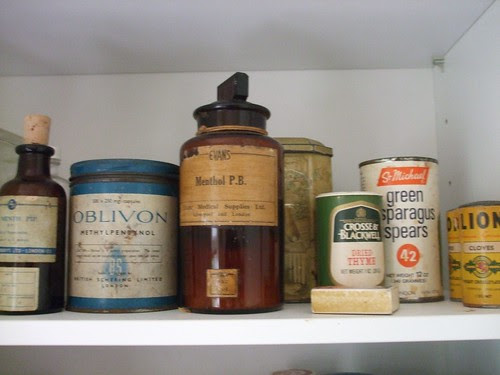 A slice of history, a photo by rajmarshall on Flickr.

A photo of some of the remaining items on my mother's shelves - some of the chemical containers came from my Dad - from when British Schering closed its site in Hazel Grove - googling on Oblivon gave that interesting set of memories. (Note that all the pharmaceutical containers are long empty!)

Last night was the first evening of the Silk Screen's new season which opened with Xavier Beauvois' Of Gods and Men (Des Hommes et des Dieux - Of Men and Gods - the director isn't happy at the transposition!).
An intense, slow moving film, it tells the true story of a small Cistercian (I think that's right rather than Trappist which some reviews have) monastery in Algeria and the monks struggle of faith and commitment to their community and to the local community in the face of a corrupt government and on the other hand of local Islamic extremists who see them as Western interlopers. The film gets inside the interior life of the monastery showing the liturgical life of faith as well as the interior struggle of the monks - being offered an easy exit by the government - but there is their long history of being there for their Muslim neighbours.I'd guess that being familiar with both faiths helps in understanding the film's journey. There's many very moving moments both in dialogue and in silence, a scene herding sheep comes to my mind, as well as the set-piece towards the end of the monks listening to Swan Lake and drinking wine together - I was reminded of Jean Renoir's film Au Revoir les Enfants - and it's use of Schubert - another example of a religious community under attack. This review is worth a read:

These Christians mean different things to people near them. To Algerian neighbors in their small town, they’re a source of free medicine and advice, not to mention homemade jam (looked like honey to me! (ed)) sold at a local market. To a government official who’s supposed to protect them, they’re a headache.
To the local army captain, who knows they succour anyone in need, they’re an aid to terrorism. And to the fundamentalist jihadists, these monks become many things: a willing or unwilling source of supplies, a mysterious force to be respected, a bargaining tool in times of war.

The above is a clip of the first contact between the monks and the jihadists - you'll find a link to the trailer for the film on the Silk Screen site (link at top of this posting - but not any more!) - I thought that trailer gave meaning to my title but it only includes fragments of the exchange so here's the full (but very short!) clip!
Here's a link to the Guardian review.
Posted by rajm at 6:10 pm No comments:

Not everyone is comfortable talking about the saints or the next world, but most people love the classic statement of life's meaning by St Augustine, which really says the same thing but more powerfully:

The thought of you stirs us so deeply that we cannot be content unless we praise you, because you have made us for yourself and our hearts find no peace until they rest in you.

A re-read, for me, of Margaret Hebblethwaite's Finding God in All Things (no relevant internet review that I could find - which is a pity as I found it pretty helpful last time I read it!
Posted by rajm at 7:14 pm 1 comment:

Tea after the Quiet day 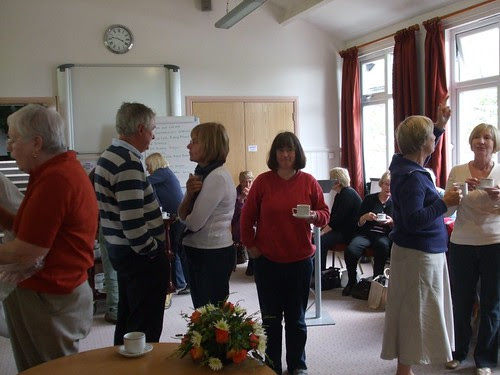 Tea after the Quiet day, a photo by rajmarshall on Flickr.

After last night's dinner, I didn't stay up much longer and an early start of 6am I drove up to Great Hucklow and the Nightingale Centre for a parish quiet day led by Robert Atwell (the bishop of Stockport). lovely setting and very helpful looking back on life in the light of prayer. Around 50 of us were there from across the Macc Team Ministry.
I might have nodded briefly but I was kept pretty well awake! 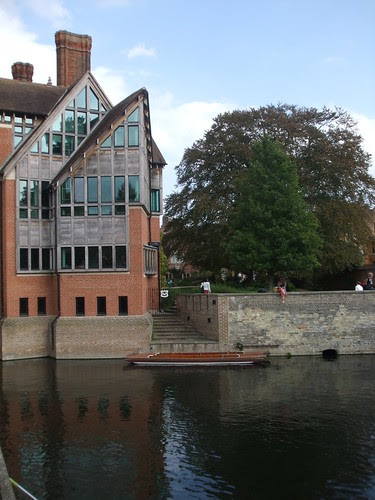 Trinity Hall the new(ish) library, a photo by rajmarshall on Flickr.

..I've had a rather busy 24 hours - Friday was a trip to Cambridge for a 40th anniversary dinner. It was good to meet folk none of whom I've seen since 1975(!) so a lot of picking up threads and news of those who weren't there and a gentle dinner in the Graham Storey room - the remodelled JCR which back in the early 70's was a real gloomy dive! As you'll see from the pictures on flickr it is rather nicer now!
The photo is of the new college library jutting out impressively over the Cam. I was very impressed by the quality of the College gardens maybe I never saw them in September but I think it has been recently improved - these are the general gardens, unfortunately I didn't get into the fellows garden!

It was not Verimovo's first fire by any means, and, we would later learn it started like all the others: with a drunkard and a cigarette. We could see black smoke lifting in waves above the summit where the old mines stood, and then, an hour or so later, a bright snake of flame coming down the hill, throwing itself down and down on a path of dry grass and pinecones, following the wind along the mountain.

Even later to this Tuesday Teaser than last week!
From our Book Group book of the month - Téa Obreht's the Tiger's Wife. I finished this last night and am still very confused as to what it was about - I'll have to decide whether to dip back into bits of it, read reviews or have another go before the meeting next month!
Here's an extract from the Guardian review

The Tiger's Wife is a frisky tiger cub chasing its tail – it covers a lot of ground, growls a lot, and never quite gets there, but we have fun along the way. What the novel lacks in emotional depth, it makes up for in personality and sheer wackiness.

This week's free word associations from Unconscious mutterings are:
Posted by rajm at 7:46 am No comments:

There's an article on Ian Bostridge - the tenor - in today's Guardian. It's all worth reading but the last lines struck me:

It's[Britten's Death in Venice] essentially about the loss of dignity of the artist. Aschenbach wants to be a grand person in grand clothes with a grand reputation, but that has cut off the sources of his creativity. What we have to do is essentially and necessarily undignified and exposing. As a performer you are mining bits of yourself in a way that is endlessly potentially humiliating. It's enormously satisfying. But you do tread a fine line."

Art and performing has to possess you (and maybe that an appropriate word in view of Bostridge's PhD), it can't be arm's length.
Posted by rajm at 9:26 pm No comments:


... the consequences of not allowing same-sex partnerships to have legal status with real force can really damage children... (h/t Geoff Coupe)
Posted by rajm at 8:11 pm No comments:

For a Friday evening

A loving ripoff of Lehrer and (at one remove) of Gilbert & Sullivan. Probably a little difficult to sing after this evening's glass of red so I won't attempt it!
Posted by rajm at 8:04 pm No comments:

Signor Murino must surely be an optimist, as well as a non-Venetian, to have covered a floor in this part of the city with parquet, for the zone lay low, and the first serious acqua alta was sure to flow in here, destroying the wood and sweeping out both glue and varnish when the tide changed.
'Buon giorno?' he called again, taking a few steps towards the doorway and leaving a trail of raindrops on the floor behind him.

Another teaser, like last week, from Donna Leon's Acqua Alta - rather a lot on the venetian weather...posting a bit late I'm afraid!
Posted by rajm at 7:59 am No comments:

The results of the 2011 Bulwer-Lytton prize - a prize for the worst opening sentence in a (usually imaginary novel - for 2011 are up ( well they were up in July) and I can't resist the prize winner:

Cheryl’s mind turned like the vanes of a wind-powered turbine, chopping her sparrow-like thoughts into bloody pieces that fell onto a growing pile of forgotten memories.

(Sue Fondrie) I also rather liked this one:

The grisly scene before him was like nothing Detective Smith had ever seen before, but there were millions and millions of things he had never seen before, and he couldn't help but wonder which of them it was.

(Sean Griffin) - from the Miscellaneous Dishonourable Mentions.
Posted by rajm at 3:43 pm 2 comments:

This autumn St Michael's is running three mid-week talks on the media - worth attending especially in the light of the events of the hacking scandal. Tuesdays at 7:30pm (at St Michael's Macclesfield - in the town centre):
When I find more information on the web, I shall link to it! - The St Michael's website now has a link to the pdf of the handout - and the order of speakers in my piece has now been corrected.
Posted by rajm at 6:50 pm No comments: