Teaser Tuesday
The rules are:I'm afraid I was away last week so missed out on this post, but here is one for this week!


The engine makes a lazy, leonine roar - the VW reverses too fast. Joe Napier thumps into the back, yells, and Luisa glimpses him hopping like a slapstick actor.

This is David Mitchell's Cloud Atlas - I was tempted to include several teasers from various parts of the book but maybe that fact is too much of a spoiler, or is it? I don't know yet but it is a compelling read so far! Here's a good summary of what it's about.
Posted by rajm at 1:13 pm 3 comments:

The death has been announced of the tenor Robert Tear

Thomas Morley - I saw my lady weep. Also much associated - for me - with the music of Michael Tippett.
Posted by rajm at 7:51 am No comments: 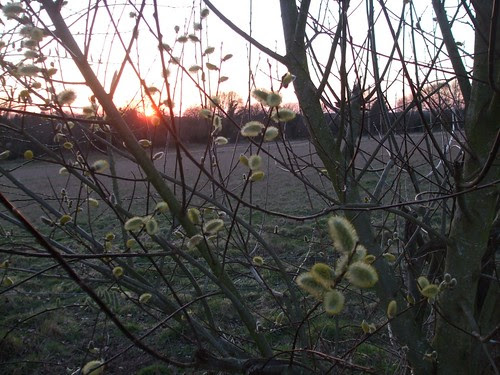 I've been away and here is a photo towards sunset in Sussex. Hopefully things will gradually reconnect and there'll be some significant content here!

This week's free word associations from Unconscious mutterings are:
Posted by rajm at 7:29 am No comments:


A film taken from a streetcar in San Francisco though an area destroyed by the 1906 earthquake. Stephen Hough says this film from from 4 days before the earthquake though the youtube poster claims it is 1905 - there's various other dates floating around in the comments on Hough's blog.
A different attitude to traffic but with those folk diving across the road in front of things I'm not sure that it's much slower!
Posted by rajm at 11:27 am No comments:

The final film of Silk Screen's 2010-2011 season was Nick Hornby's adaption of Lynn Barber's book 'An Education', here's the trailer:

some wonderful scenes and details, funny and yet there's the emotional punch hiding in the background of a 16 year old being seduced (in many ways) by an older man. Carey Mulligan is wonderful as the youngster, but Molina is excellent as the father also seduced by Peter Sarsgaard's winning ways. I intend to read the book and here's the Guardian review and here's another which is worth the read:

An Education plays out rather like a diary read. When you write of exciting moments in your life, you don’t need to elaborate on certain things, like best friends’ names or schoolwork, and this film doesn’t bother to either.

The showing was followed by the society's AGM - the most highly rated - by the audiences - film of the season was In the Valley of Elah, which, alas, we didn't see with the events of last year. Before it I was educated in the ways of projecting the films - so future reviews here maybe less impartial!
Back on 'An Education' both of us bridled at the letter from Oxford University - obviously the college system was thought to be too complicated for viewers - I also spotted a cup design in one of the scenes of which I still have a piece (I bought mine in the 70's).
Posted by rajm at 12:19 pm No comments:

After the Second Lesson she risked a sidelong glance and saw his red hands on the red buckram binding of his prayerbook.
She blushed in confusion and slipped on her gloves.

Romance amonst a farming community of Wales in Bruce Chatwin's On the Black Hill. Harsh austere but with lovely flashes of humour - I think I'm going to enjoy this! I've only read his Utz before.
Posted by rajm at 3:01 pm 1 comment:


Last night there was a French Film evening at Macclesfield College and after a buffet cooked by the catering students (you take a risk! - but every time I've been it has been marvellously cooked and served) they showed Rémi Bezançon's Le Premier Jour du Reste de ta Vie (I don't think I need a translation of the title). A funny and moving film about the inter-generational gap, growing up and the way patterns replicate themselves down the generations. It was a great hit in France - mainly by word of mouth - not a lot happens in the film but it is the little telling details. Maybe there's over-much focus on the family - surely there'd have been partners at, for example, the scattering of the ashes scene? Death looms large - particularly for dogs(!) but it has a tender and affirming message. A couple of reviews are here and here's a a blogger's take on it. Clément Courouve, who introduced it, said that he saw new details and themes each time he's watched it and I shall probably be re-watching...
Posted by rajm at 11:43 am No comments:

Yesterday afternoon found me in Manchester, initially for a concert at the RNCM as part of their Judith Weir festival 'Tigers Under the Table' three works:
I should have made notes but, for me, the Piano Trio Two was the most appealing - a meditative work for the traditional ensemble; the new work was a wind quintet (flute/oboe/horn/clarinet/basoon with doublings for piccolo and saxophone) and the final work used a variation on that wind ensemble. It was enjoyable lunchtime.
In the evening a complete change of culture for the Manchester blog meet at Common on Edge St, a very crowded and noisy affair - but good to meet lots of folk I saw at the last meeting, now new twitter feeds to follow and lots of un-tigered tables to have free drinks and cup-cakes around. Picture here - drinks kindly provided by I love to Love - there I must have been bribed sufficiently.
Posted by rajm at 8:30 pm No comments:

Teaser Tuesday
The rules are:Well it was yesterday, this is a bit late!

She was sitting at the end of her bed, dressed and ready, suitcase standing by her feet. She had on a navy-blue duffel coat he had not seen before so that he supposed some friend of hers had called by her lodgings to bring her things she needed.

Patrick Gale's 'Notes from an exhibition' - our latest book group's monthly read. I received it on Monday so the above tease is from early in the book.
Posted by rajm at 10:47 am No comments:

After a discussion on Poulenc's Gloria in the midst of last night's piano lesson (Uttoxeter Choral Society and Sandbach Voices are performing it next week), I spent this morning with Poulenc's Les Mamelles de Tirésias

Written in the midst of the occupation of France in the 1940's Poulenc sets words of Guillaume Apollaire. This YouTube clip is from the first act. It gets madder - here's the wikipedia summary of part of act two:


The curtain rises to cries of "Papa!" The husband's project has been a spectacular success, and he has given birth to 40,049 children in a single day. A visiting Parisian journalist asks how he can afford to feed the brood, but the husband explains that the children have all been very successful in careers in the arts, and have made him a rich man with their earnings. After chasing the journalist off, the husband decides to raise a journalist of his own, but is not completely pleased with the results.

..and ends with a call for the audience to go and produce children:

I was introduced to this piece in the 1970's - at Cambridge - where a theatre group performed this with Stravinsky's Soldier's Tale. I went to see it twice - in part because it was so enjoyable partly because on the first visit I ended up sitting behind a tourist couple who thought they were here to see the Cambridge Footlights and were somewhat surprised at what they were served up with! They were rather restless so I got a far better chance the next night with various of the performers appearing from among the audience. On the Footlights connection - could Monty Python have appeared without some of these surreal pieces of French humour - I'm also thinking of Zazie. There appear to be quite a few film clips from various performances of this work on youTube.
Probably not suitable watching for International Women's day later this week!
Posted by rajm at 12:42 pm No comments:


Last night's film said very little but it said an awful lot. What happens when the language you have belongs to the community which cages and keeps you in check. A film of the aboriginal community in Australia. The images and sounds will live with you. A review here
Posted by rajm at 3:10 pm No comments: 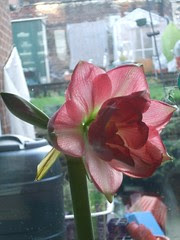 Once, when I wandered in the woods alone,
An old man tottered up to me and said,
“Come, friend, and see the grave that I have made
For Amaryllis.” There was in the tone
Of his complaint such quaver and such moan
That I took pity on him and obeyed,
And long stood looking where his hands had laid
An ancient woman, shrunk to skin and bone.

Far out beyond the forest I could hear
The calling of loud progress, and the bold
Incessant scream of commerce ringing clear;
But though the trumpets of the world were glad,
It made me lonely and it made me sad
To think that Amaryllis had grown old.

I see the Amaryllis is out earlier this year than last.
Ther's a certain similarity between the poem for last year and this - but I suppose the 'flowers of the field..'
Posted by rajm at 9:23 pm No comments:

Teaser Tuesday
The rules are:This is the teaser from very early on in the book with much water yet to run under the bridge:

In a televised version of one of Nancy's books, these child hunts were given a more sinister connotation with the children running terrified through woods while their father, on horseback, thundered after them with a pack of hounds baying. In fact the children loved it - they thought the hound was - 'so clever'.

Mary S Lovell's 'The Mitford Girls' - our bookgroup's book of the month - actually last month's book I need to get a move on and finish it before next week's discussion on it! Here's the Observer review by Lynn Barber which I linked to on the groups facebook page.

Oh what a shriek! What a hoot! What a tease! They're back! Those mahvellous, multi-faceted Mitford girls - Diana the fascist, Decca the Communist, Unity the Nazi and Debo the duchess, Nancy the novelist and whatshername who kept chickens and had a blue Aga to match her eyes.

gives you a glimpse of the style...
I've now finished my re-read of Arditti's Easter (which I teased last week) I'd forgotten how good it was though you do need to know a fair bit about the Church of England to fully appreciate his analysis (in fiction) of its foibles!
Posted by rajm at 2:13 pm No comments: