Incendies Trailer HD by eOneFilms
Here's a review a film telling of a family caught up in civil war in a Lebanon like country, told partially in flashback partially as the children discover the history of their mother. Raw and emotionally gruelling but strongly recommended! At the quiet day we attended the weekend after, somone was saying from a reading of Lucy Winkett's Our Sound is our Wound that for humans singing may have predated speech this, for me gave an added edge to the character of 'The Woman who Sings' in the film.
Posted by rajm at 5:51 pm No comments: 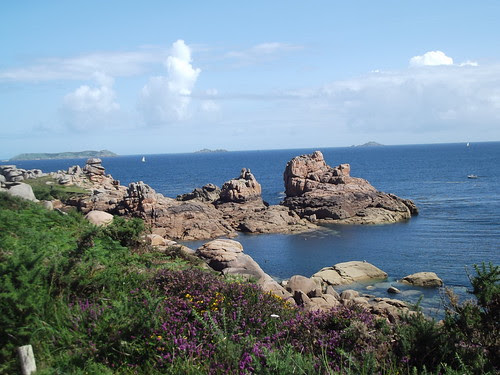 The next day of the holiday was walking Le Sentier des Douaniers and old smugglers path over to Trégastel. Spectacular rock formations next to the sea - and the weather behaved! Probably the most popular part of the coast but it was much enjoyed lots of little rocky harbours. The rocky outcrops reminded me of the Staffordshire Roaches with the tide in! Here's the link again to the flickr album.


The lagoon is full of secret currents, shoals, clinging water-weeds. Over most of its expanse, if you lie in the bows of your boat in the sunshine, with a hamper beside you and an arm around your waist, you can see the slithery foliage of its bottom scudding obliquely beneath your keel: until, rashly taking a short cut, you find yourselves soggily aground, your propellor churning the mud around you and your idylls indefinitely postponed.

A last lingering look at Jan Morris' Venice - a reminder of warmth and sunshine on this cold very wet day here in NW England!
Posted by rajm at 7:42 pm 2 comments: 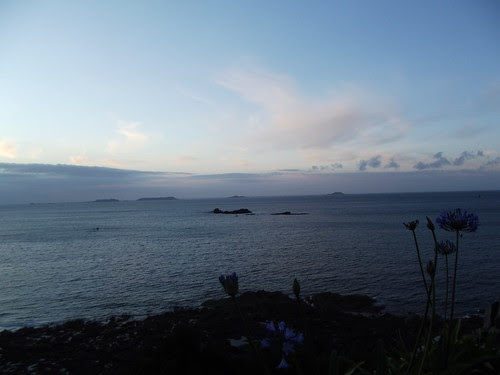 The next day was a rest day, we spent it wandering around Perros Guirec, a trip round a museum of local hostory, lunch at a creperie and a wander along the beach. Dinner again at the Manoir du Sphinx admiring the sunset.

This week's free word associations from Unconscious mutterings are:
Posted by rajm at 7:52 am No comments:


She closed the file, and for half an hour or more sat at the desk with her head in her hands, paralysed with shock and indecision. She could not reveal what she had found, and yet how could she live with the knowledge?

Approaching the end of The Thread - by Victoria Hislop - and a real teaser!
Posted by rajm at 10:41 pm 3 comments:

This week's free word associations from Unconscious mutterings are:
Posted by rajm at 2:22 pm No comments: 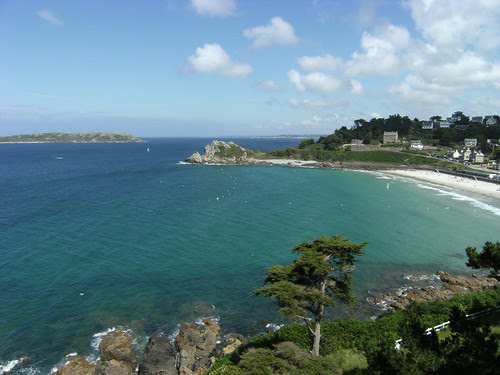 DSCF0955 Plage de Trestignel from the Manoir du Sphinx, a photo by rajmarshall on Flickr.

Day three started with a taxi ride to Port Blanc and then we walked to Perros Guirec for a 2 night stay at the Manoir du Sphinx - a long walk by the shore. Route finding was sometimes tricky. The weather was much better and the port of Perros Guirec was a good resting place before the final hill up to the hotel! The photo was taken from our room and the hotel restaurant jutted out over the hotel lawn giving stunning views as we ate - we were lucky with our table - some tables were further away from the windows!


The four walls of her magnificent house were like a cage, within which she was safe. Food was brought to her, clothes were sewn for her, the hairdresser attended to her hair at home and now her son came and went without need for guidance or help.

Victoria Hislop's The Thread - our book group book for the month A pretty trailer but doesn't tell you much more than is on the back cover, The story of Greece (or maybe a story of Greece..) in the 20th century...
Posted by rajm at 9:35 pm No comments:

This week's free word associations from Unconscious mutterings are:
Posted by rajm at 2:05 pm No comments:

A quiet lane in Tréguier 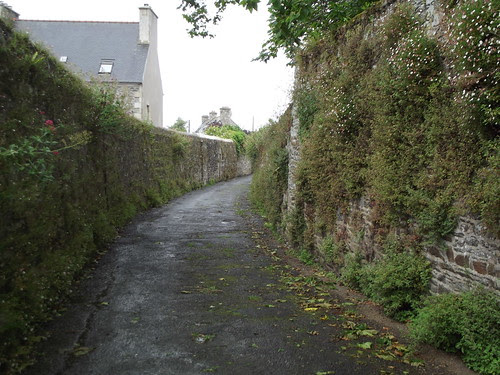 A quiet lane in Tréguier, a photo by rajmarshall on Flickr.

Day 2 of this year's holiday was a walk to Tréguier along the coast past Neolithic remains and the Jaudy estuary. This was the day it rained - cleared up once we got there and the hotel for the evening had a starred Michelin restaurant.

Try not to laugh (too much) it's been a busy week!


In the plushy cafés of St. Mark's (Regency stripes and spindly chairs) spruce listen with deference to the interminable reminiscences of immaculate uncles: and in the cafés on Christmas eve 20,000 families giggle before the television sets, drinking Cinzano and eating sticky cakes, while the favourite melody of the day is passed from shop to shop, from square to square, down one dark alley to another, like a cheerful watchword in the night. The Christmas services are warm, bright and glistening; the cribs are crude but touching; the choirs sing lustily; and Venice feels less like a grand duchess than a buxom landlady, enjoying a glass of stout when the customers have gone (except for the mysterious permutations of clergy, gold and crimson and misty with incense, that you may glimpse passing and repassing the open doors of the Basilica).

A wonderful extract from Jan Morris's Venice - in the off season (if it now has one) - irrestible and draws one back! Soak in the atmosphere - this is a re-read for me - but probably a little old as a guide book.
Posted by rajm at 12:53 pm No comments: 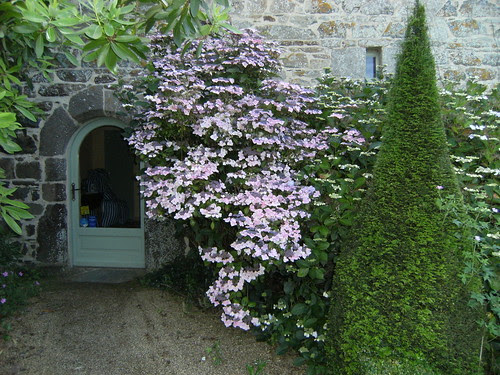 DSCF0931Troezl Vras door hidden by hydrangeas, a photo by rajmarshall on Flickr.

It's been rather a long time since we returned from our summer break - again an Inntravel tour, this time the Granite Coast of Brittany. So while I still remember it a few comments: we spent the first day on a circular walk around Troezel Vras, country lanes and coastal walks, we went past a large house which has some connection to the du Mauriers. Returned in time for a trip to a local wine merchant - this was one reason for going by car! The fish eater very much enjoyed the evening meal - we should have alerted them in advance that one member of the party isn't keen on oily fish! As you can see the accomodation came with a lovely courtyard. The complete set of photos from the holiday is here