..a new measurement of noise?

From this week's Macc Express comes this quote:

The end came after the car – latterly on just three wheels after losing one on route – ploughed through several gardens, hedges, fences and a lamp-post and crashed so violently into the three-year-old two-bedroom detached bungalow that it dislodged the bathroom tiles and woke up the local vicar half a mile away.

Loud enough to wake the local vicar - I'm sure they're not know for being asleep. Has echoes of a certain Monty Python sketch.

Also note the 'on route' eggcorn
Posted by rajm at 11:35 am No comments:

Next door neighbour is having the chimney rebuilt and ours is a bit dodgy but I've also been shown the crack in the picture! It's not visible from our garden and looks expensive! The wooden top to the side passage has been used to support the next two stories.
Posted by rajm at 10:43 am No comments:

Macclesfield to Goostrey via Warsaw?

Googled on this and was amazed to find as the second and third hits, links to a Polish form of British rail enquiries! Can't find Macclesfield or Goostrey in the source of that page and if I try to get a timetable it wants an intermediate station (well it does need one!). The Google summary reads:

Beth suggests it is for the benefit of Polish agricultural workers coming over here.

Of course by the time you check the google it may have changed the hits given to make a more useful site higher in the rankings but that would spoil the fun!
Posted by rajm at 8:28 pm No comments:

Someone at Sainsbury's bought £4+ of root ginger and a sandwich yesterday, it apparently wasn't involved in drink making but he didn't volunteer any more.
Posted by rajm at 11:26 am No comments: 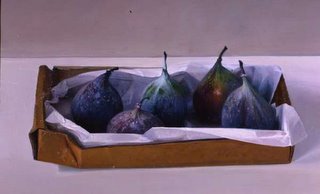 Via Finking Out Loud I've found this gallery and the art of Andrew Hemingway, now I just need £10000 or so! The above picture is `Still Life with Figs in a box'
Posted by rajm at 11:11 am No comments:

Remembering Heinrich Harrer who died this week. Mountain climber and explorer. The Independent obit copied to alt.obituaries. He was one of the first party to ascend the North face of the Eiger. His book on the history of their climb and of other failures made me want to learn to climb back in the 1960's when I read it - and a family holiday that year(?) in Grindelwald only increased the impetus.
He was a member of the SS - the Guardian obituary claims that he hushed this up:

Harrer omitted to mention that as a young man in Austria he had joined the Nazi party, and, with his fellow climbers, had been congratulated in person by Hitler after making the first successful ascent of the north face of the Eiger.

but I seem to remember a picture of the handshake in the library copy of `The White Spider'.
The Eiger link has some of the old photos - and made me want to dig out and scan some of my climbing 35mm slides - just need to acquire that scanner first!!
Posted by rajm at 10:00 am No comments: 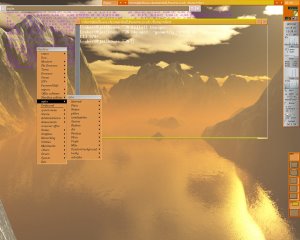 Screen shot of my latest terragen render used as a background in blackbox. Blackbox is a Linux window manager but there is a version that runs well under Windows which I used to use at work - I see that it now says that bb4win is no longer under development but there are other lookalikes on that page. I have made the goldnem Wein style accessible from my home machine. Title of the style is from Georg Trakl's poem Verklärter Herbst
Posted by rajm at 4:47 pm No comments: 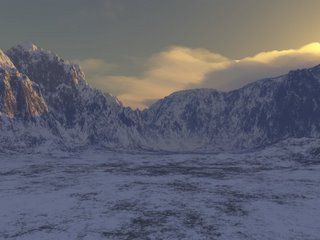 Took advantage of the Terragen New Year sale to register my copy. It runs very nicely - in spite of being a windows application on Linux using Wine. The above picture is with the registered version, some with the unregistered copy are on my home machine. I hope that new better images will soon appear there. Alas the sale is now over.
Posted by rajm at 11:55 am No comments: 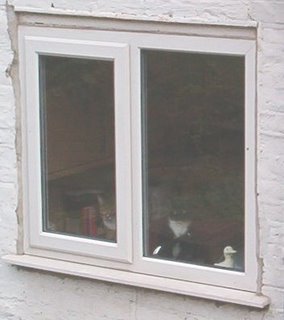 What are they glaring at? Our cat is just out of shot enjoying a leisurely wash in their garden. See here for the full picture.
Posted by rajm at 11:00 am No comments:

Story in the Macclesfield Express. I've again nicked the picture...
Posted by rajm at 10:39 am No comments:

A post-Christmas trip down to my mother and a trip to her favourite restaurant at Amberley the Boathouse - can't find a sensible web url or picture so one of mine will have to do. Good if you like carveries but I was left queasy by the custom of dressing waitresses in what, to me, were schoolgirl costumes. The area is full of John Ireland reminiscences for me - even the placenames. It is very close to the Amberley Working museum well worth a visit - was it used as a location for one of the Tom Baker Dr Who's The Deadly Assassin? 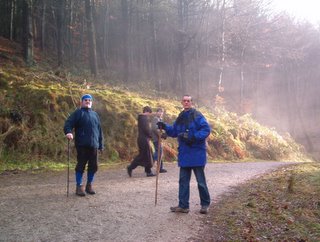 New Year's day walk up Shuttlingsloe along with most of Macclesfield (it seemed), much easier to reach than the last time I walked there when I don't think there was a proper right of way. A walk which always brings Alan Garner's Weirdstone to mind. Some photos of the walk and of the cat at Christmas(!) are on my home web site
Posted by rajm at 6:05 pm No comments: