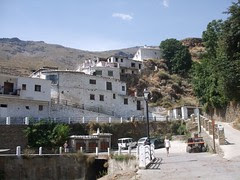 Trevelez - barrio alto - upper town
Originally uploaded by rajmarshall
The next day should have been a walk to Trevelez but we'd been warned by the folks ahead of us that wayfinding was difficult, in some places the advertised path was impassible - and they'd been chased, and stung, by a swarm of hornets! Did I mention it was a 17km, 7 hour walk? We therefore took the easy option of the bus - though we did walk to Busquistar. The Bar Vargas was closed the day we went though - Wednesday - but there is another bar elsewhere in the village - which had a number of puppies as opposed to the usual cats, see the album for canine photos! Once in Trevelez we found the Hotel La Fragua - quite a way above the bus stop in the barrio media. We walked to the upper town (in picture) to have a drink while admiring the view of the valley and town. That evening we ate in the hotel restaurant - restricted menu choice being on an inclusive package - but very good (see the hotel website for the full menu!)
Posted by rajm at 12:02 pm No comments:

A very gentle film, no great drama but the undercurrents of what isn't said in family relationships are always there. It tells of a family reunion to mark the anniversary of the death of the sons, the individuals have changed aged since then and the extent to which they are willing to recognise that, is the plot. There's the trailer on youtube too but I liked these two scenes!
Posted by rajm at 10:08 am No comments:

"Mae Mobley's sleeping?" I ask.
"Finally." Elizabeth fiddles with a clump of hair that's slipped out of her roller, grimaces at its obstinacy.

Mississippi in 1962 from Kathryn Stockett's 'The Help' - this is our Book Group book of the month - I need to get a move on with this as the meeting is less than a week away!
Posted by rajm at 1:07 pm 4 comments:

The Taha valley from Pitres 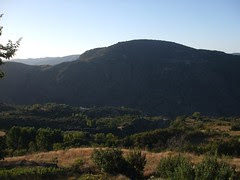 Looking into the Taha valley from Pitres
Originally uploaded by rajmarshall
The walk for the following day consisted of a circular walk around the Taha valley very steep with rocky paths and ruined mills. We found a pleasant bar in Ferreirola (not mentioned in the walking instructions) where we had a long and leisurely lunch.
Just before you reach Ferreirola there's a spring called La Gaseosa providing free agua con gas! The walk ends with a punishing climb back up to Pitres! Dinner was again at the Hotel San Roque. 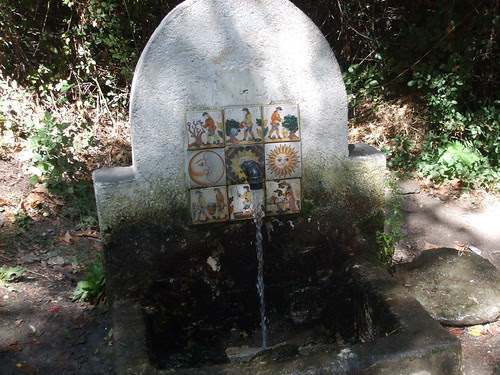 As before my full photo album is here
Posted by rajm at 7:54 pm No comments:

The walk over to Pitres 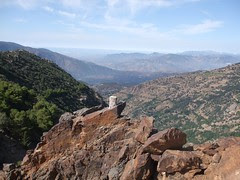 View from the crag
Originally uploaded by rajmarshall
There was a certain amount of trepidation faced with the first non-circular walk after the difficulties of the first day! Today's was though far easier, it went up the shady side of the hill above Capileira with views over to the Mediterranean and the Atlas mountains just being visible then just after we joined the GR7 (a long distance walk) we reached the point in the photo - now on the sunny side of the mountains and time for a rest. The walk heads through the Barranco de Sangre scene of a vicious battle between the Moors and Spain in 1570 and then into Pitres and the Hotel San Roque (after a stop at a bar for drinks, tapas and fending off a cat) where we stayed two nights.
The hotel is very small but we were well catered for - there were though noisy workmen due to some emergency repairs! That evening we thought we ordered 1 litre of vino but ended up with a litre of Rosé sherry (25%) - we only realised when most of the way down the first glass having been warned about the robustness of the wines!
Here's a rather interesting weblog El Paraje de las Alpujarras on walking and culture of the Alpujarras.
And here's some music from the area played in the same hotel:

Nabbed the link off entartete musik where's there's also film of the younger Montand singing the same piece, what a distance he has travelled between the two interpretions - this is hairs on the back of the neck stuff. I love the music of Joseph Kosma...
Posted by rajm at 12:29 pm No comments:

They visited some unknown English friends - perhaps tutees or conversation partners - who spoke a little French and had advised Rimbaud 'to go to the country or the seaside to recover completely'. He even took them to the docks and pointed out the Antwerp ferry, presumably without mentioning the tearful scene when Verlaine had left for Brussels.

From Graham Robb's biography of Rimbaud which I've just finished - a really good read particularly on his long silence from poetry after the splendour of his youthful poems. I loved the bit where he managed to get himself expelled across a collection of European countries as a way of getting home. Strongly recommended.
A few years ago we spent a week in France staying at a gîte which was built on the site of the farm at Roche to which Rimbaud continually returned - now it has a poetry themed walk.
I picked up my copy in the local Oxfam where the inside flyleaf has the original owner's name and the message 'To ____ Enjoy Rimbaud make sure you give it back though theif(sic) face ___ xxx' not sure whether it was given to Oxfam by the owner or thief-face!
Posted by rajm at 3:07 pm 2 comments:

Windfarm in the Poqueira valley 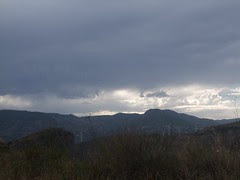 Windfarm in the Poqueira valley
Originally uploaded by rajmarshall
Three years ago on our first visit to Spain we walked in Almeria, this time we were a month earlier and in the Alpujarras. Drove from Malaga airport - in a hire car - up the hairpinned road to Capiliera and rewarded by this sight of a windfarm in the evening light. We stayed at the Finca los llanos and ate the first evening at Casa Ibero - recommended for vegetarians - though all of us had a meat main course! It appeared to be connected to the local Buddhist centre O Sel Ling. Next day we thought it might be a gentle breaking in walk but we were warned by the folk who were a day ahead! One of us slipped and fell off the path and it ended with the path being a walk up a stream! In between though, there was the spectacular bridge over the Poqueira - see the flickr album for some photos - we just did the beginning and end though this did involve the difficult bit! The walk was circular and we returned to Capileira for a meal at the hotel, I tried the plate of Alpajarras specialities - sausage, black pudding etc, lovely but having gone for the starter which I thought was a selection from the starter menu but was actually lots of salami etc., I rather ran out of steam! For dessert the English translation of the menu suggested 'house tart' which suited our naughty sense of humour!
Posted by rajm at 7:20 pm No comments:

This week's free word associations from Unconscious mutterings are:
Posted by rajm at 3:15 pm No comments:

Back from the Alpujarras 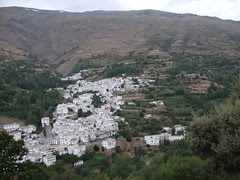 Looking back to Trevelez
Originally uploaded by rajmarshall
We've just returned from a much needed few days walking in the Alpujarras region of Andalucia. Another trip with an itinerary provided and hotels booked by Inn Travel. Hot and dry but much enjoyed, the photo album is here on flickr - rather too many pictures of cute furry animals and not enough of the scenery! I'll blog more about the separate days soon!
Posted by rajm at 1:26 pm 2 comments:

I'll get around to listening to it too when I have a faster connection- this is Lotte Lenya who was married (more than once!) to Kurt Weill - the composer of this.
Posted by rajm at 7:35 pm 1 comment: 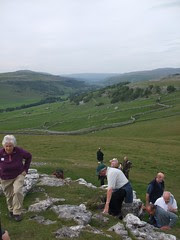 Conistone Pie
Originally uploaded by rajmarshall
Many years since I've been up on Conistone Pie - this weekend we were at Scargill on a weekend for those, like us, who have been assisting with the re-opening of Scargill over the past year - a wonderful time was had of meeting, meals and an excuse to re-visit the place. The Saturday afternoon walk was up to Conistone Pie and quick dash back - for us - to catch Phil Stone talking about the current position, development plans and the future.
Posted by rajm at 9:40 pm No comments:

This week's free word associations from Unconscious mutterings are:
Posted by rajm at 9:33 pm No comments: