Up to Paço de Calheiros

More on that even more receded holiday in May! The next day's walk was a very gently affair, we arrived at the final manor house around lunchtime. If you do this spend more time in Ponte de Lima - where by the way the lamp posts play brass band music at you - I think this was set off by motion detectors and they seemed to be still activating late into the evening, if you're allergic to brass band music walk down the middle of the road! 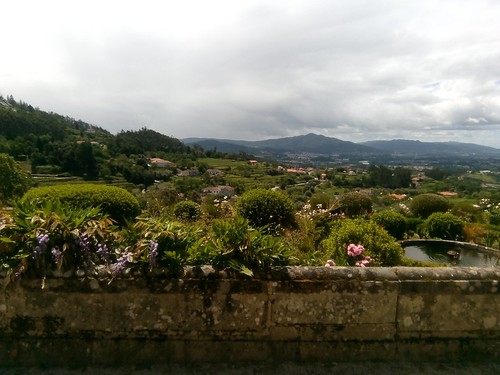 A slightly ascending route and we ended up in a wonderful room for 2 nights in the manor house - the picture is a view from the terrace outside the room. Extensive grounds and the house is worth the look around. There were quite a few groups for the evening meal in a grand dining room!
Posted by rajm at 7:46 pm No comments:

This week's free word associations from Unconscious mutterings are:
Posted by rajm at 6:29 pm No comments:

This week's free word associations from Unconscious mutterings are:
Posted by rajm at 3:16 pm No comments:

I wrote this letter to my MP after an earlier exchange of letters where David Rutley's response failed to address any of my points and was clearly a form letter from conservative central office. I got the first response around 24 hours after my email, his was sent my post - why(?). I'm still waiting for a response from this.


Thank you for your speedy response to my email about the deselection
of rebel tory MPs, unfortunately your letter addressed none of my
points and seemed to be to be high grade flannel from Central Office,
but no doubt you're a little busy. Let me then offer these questions
for hopefully a more to the point consideration.

Were you there at the Chequers meeting which agreed that Tory MPs who
rebel on Bexit will be ejected from the party and not allowed to stand
in the future?

Do you agree with that position?

Will the same sanctions apply to anyone from the extreme right of the
party who votes against any agreement by Johnson's 'negotiating' group
delivered before 31st Oct?

Did you know about the decision to prorogue Parliament more than 24
hours before it was publically announced? (the leader of the House
appears to have difficulty with this question hopefully you can give a
more honest answer)

Was the decision to prorogue Parliament announced on 28th Aug discussed in a full meeting of Cabinet beforehand?

If the answers to either of the last 2 questions is no, then your
letter saying 'nothing to see here' 'usual practice' is clearly a
lie. I remember (you may have forgotten) that the decision to extend
the Parliamentary session was taken to give the time for Bexit to be
done. To therefore prorogue 6 weeks before the current departure date
seems a little at odds with that!


I guess these direct questions are a little harder to flannel around. I see his twitter handle on the linked parliament page is still incorrect - should be @DavidRutley rather than @DavidRutleyMP. David Rutley is a tory whip.
Posted by rajm at 8:52 am No comments:

This week's free word associations from Unconscious mutterings are:
Posted by rajm at 8:41 am No comments: