Grrr! some idiots set fire to the local school at the weekend, million pounds or so damage - went in with son today to sort out his sixth form options and one building - the arts department - has gone. See the Macclesfield Express for full report - I do wish they'd post things more regularly than their weekly paper edition... We live very close but didn't know anything about it until we saw the local BBCTV news the next day.
Posted by rajm at 5:19 pm No comments: 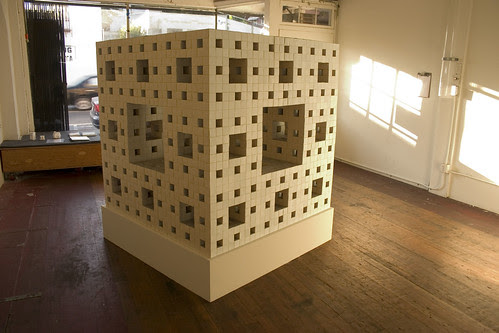 via jwz's live journal, comes this picture of a Menger sponge made from business cards - 9 years of effort! 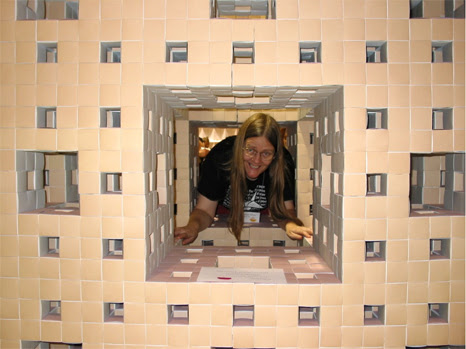 More pictures and explanation here
Posted by rajm at 1:00 pm No comments:


Produced these this month - need to clean up a few more and post them on my home server.

Reduced my Sainsbury's hours but other hours have increased and going to be busier...and stunningly have broken the 19ipm barrier - nearly 19.5 - don't think I'd ever exceeded 18.5 before.
So updates here may be more sporadic.
Posted by rajm at 9:05 am No comments:

You scored as Cultural Creative. Cultural Creatives are probably the newest group to enter this realm. You are a modern thinker who tends to shy away from organized religion but still feels as if there is something greater than ourselves. You are very spiritual, even if you are not religious. Life has a meaning outside of the rational.

What is Your World View?
created with QuizFarm.com
edited to get better formatting - the html from quizfarm assumes a width that blogger doesn't allow!
Posted by rajm at 7:26 pm No comments:

The Isle of Man enters the 20th century

The 'Tynwald', the Isle of Man's independent legislature, has voted to bring the homosexual age of consent into line with that of heterosexuals on the island, simultaneously scrapping rules stopping the discussion of homosexuality in schools on the island between teacher and pupil.

no doubt some in the Tynwald were dragged kicking and screaming here.
I still remember a slightly odd holiday we had in St Mary's back in the early 1960's where we were the only residents in the hotel. Going from Southport (home!) to the Isle of Man still felt a bit of a step back in time(!)

As the BATS weblog is still lying in pieces on the floor - at least as far as adding entries is concerned I think I need to write down what we've read since the last list compendium (and starting with the most recent):

hope I've not missed anything out!
Posted by rajm at 7:23 pm No comments:

.. on Monday - a bottle of good French Brandy, a tin of cat food and a cheapo sliced white loaf.
Posted by rajm at 1:27 pm No comments:

Not a great surprise...

What European City Do You Belong In?
Posted by rajm at 8:18 pm No comments: