The GR52A over to Saorge

So the next day was the longest walk of the holiday, an early breakfast and then repeating the ascent I'd done the day before - I did wonder whether I should have taken a tent and camped out the day before!

The ascent was successfully negotiated and half way through the morning I was overtaken by other (younger!) Inntravellers, though we kept more or less together for the rest of the walk - it helped to pace me. The picture above is from the Baisse d'Anan at 1555m - another steep uphill scramble before these wonderful views. We found golden retrievers up there with bells on their collars - clearly sheep herders though a border collie appeared to be doing most of the work! We stopped for lunch further down. Alas there weren't the flower filled Alpine pastures that we'd seen on Saturday. We carried down to the small town of Saorge and I was pleased to have made the walk in just over 6 hours - when the walk notes suggested 8 hours. This gave us more time for a look around the very scenic Saorge. 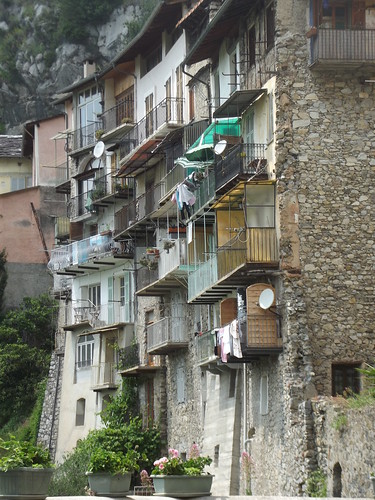 Not only houses like the above but being nestled in a high valley, if you do this route try to take the time - even if tired!! - to walk around the village. You'll get views like this from just below: 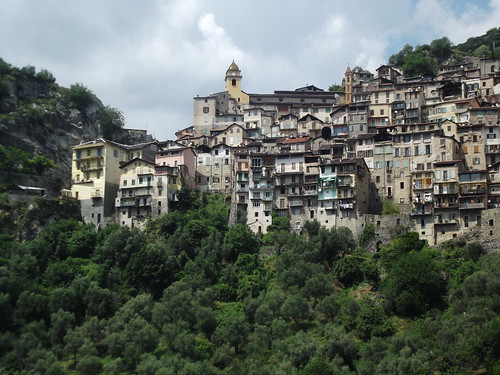 There was then drinks at the Cafe Heinz and a taxi transfer to the Auberge Provencale in Sospel. A hotel just out of the town but with excellent views over it.
Posted by rajm at 10:19 am No comments: 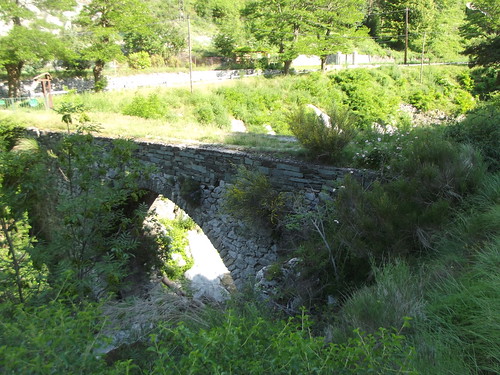 The next day I decided upon 2 walks - the first was of the InnTravel suggested walks around La Brigue to Notre Dames des Fontaines - linked to the French wikipedia page the English version has far less information. This was an amazing place with 15th/16th C frescoes. My pictures weren't good so here's a documentary (in french) off youtube - even if your French is not good the pictures are amazing!

It's a relatively short walk from La Brigue - the church is open at 10am and there's an entrance charge of 4€. I then walked back to the village for lunch - there's a Sunday market.

After lunch I wanted to check out the steep section of the GR52A that was the (longer) walk for the next day. As I would be on my own I wanted to be comfortable with the initial challenge without having to be concerned about the time. I almost gave up there's some very punishing climbing - I'd decided I'd had enough and with the phone checked out google maps and discovered I was 200m from the first Baisse (col) and the Inntravel walking instructions said the last 150m were level so I staggered round the corner and it was true! I returned fortunately getting off the exposed bit before rain and a thunderstorm arrived! 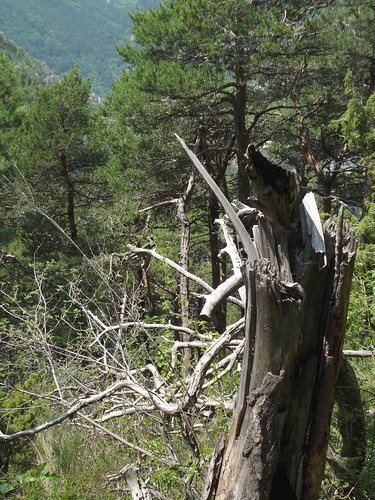 It was a useful reconnoitre to also make sure of the route-finding!
Posted by rajm at 2:21 pm No comments:

The next day - as an extra - paid for at the hotel, we set off early for a trip to the Vallée des Merveilles where we were led - very well and knowledgeably by Sebastien the son of the hotelier - a photographer and guide. We weren't certain what we were going to see but a spectacular day was much enjoyed with the high mountains, the wildlife - ibex, chamois and marmots, alpine flowers, the Bronze Age carvings and the walks. 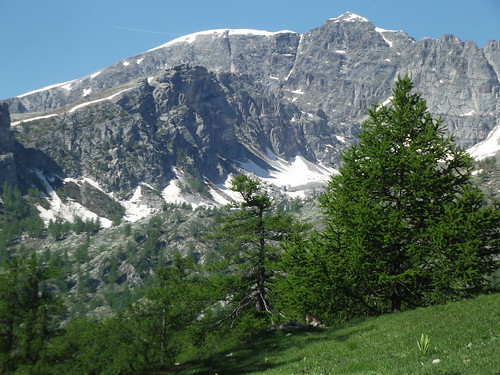 you can just see a marmot relaxing with a mountain view in the picture.

The Vallée was around a 30 minute drive from our hotel - a 4x4 being essential - the tour started with walks in the meadows viewing flowers and wildlife then up to the higher area to see the carvings (and lunch) and finally a tricky descent through snow back to the vehicle - it was early in the season hence still some snow. We heard a lot about the history - both of the groups who carved the images and of their discovery and preservation from our guide. We'd recommend the trip! You can see more images of the day if you visit the picture and click the 'Vallée des Merveilles' tag.
Posted by rajm at 12:45 pm No comments:

Another year, another holiday and again an InnTravel walking tour, the Maritime Alps walking to the coast. 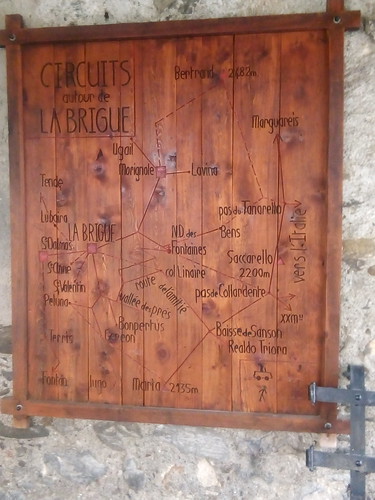 The holiday - after a flight to Nice - started in La Brigue - unfortunately Beth had twisted her ankle in a practice walk before we left - so I did much of the walking alone while she indulged in gentler occupations. I spent a pleasant in a short walk around La Brigue while we both considered the next day's excursion to the Vallée des Merveilles. The album for the holiday is here - a little more tagging needs doing but I think it's all there.

We stayed at the Hotel Mirval for 3 nights (taking an extra night to get our bearings). Some hotel facilities were a bit basic but the food and the welcome was good. And then there were the views from our room...
Posted by rajm at 8:04 pm No comments:

This week's free word associations from Unconscious mutterings are:
Posted by rajm at 7:05 am No comments:

Beyond Inclusion: Part One - Lizzie Lowe's Story - Growth but at a price

An interview with the vicar of St James and Emmanuel Didsbury about their response and growth towards inclusion following the death of Lizzie Lowe. Their church's silence on difficult matters of sexuality led Lizzie to believe that she coud not be loved by them or by God as a young gay person. They realised they needed to change. This is worth the watch and consideration. Read more on the church's acions and her story at st james and emmanuel
Posted by rajm at 9:26 pm No comments:

This week's free word associations from Unconscious mutterings are:
Posted by rajm at 8:43 pm No comments:

This is going back a bit but earlier this year I went to FOSDEM in Brussels and this is my report for work on what I saw and heard.

I spent Saturday in the community dev room some interesting thoughts on building and supporting open source communities.
- Talk by Riccardo Iaconelli on Italy as hacker friendly, he described the policy all municipality projects are open source
https://developers.italia.it/ some discussion on how to encourage small municipalities to make source open
when those who are 'not our electors' get it for free
- An entertaining talk by Brian Proffitt of Redhat on Media 101 for communities - how to get the
message across to more than just the echo chamber.
- Then Kevin Fleming of Bloomberg on Software philanthropy for all - a talk about how they engage their
staff in volunteer community projects. Running a git event in New York they found that it helped their volunteers' cross project communications. `Pick what you're good at not what's shiny`
SeeKevin on Twitter
- A talk by Jeremy Garcia not so interesting but a nice demo of MeasuerOSS
> don't consider what you want to measure but what you want to accomplish
- Draws veil over the community karaoke and dancing (relieved to see this wasn't recorded) - but there was an advert for [FrOSCon](https://www.froscon.de/) which they emphasised takes place in warmer weather!
- Finally a talk by Vicky Brasseur on `Passing the baton' on planning for succession
Wikipedia page on succession planning implies only leaders need this - not true - described 'bus factor', How frequent interchange of roles prevents ruts, reduces load (by more knowing)
increases motivation. She moved rather quickly. Limit tenure for role (because you then have backup if you move on)
Slides (and notes) at succession planning

Sunday I was in the Distros devroom, far too much light coming from the back to see many slides.
- A talk from Andrej Shadura of Collabora (he wanted to do a LAVA talk but it wasn't accepted)
Talked about [apertis.org](apertis.org) a weird mix of Ubuntu and Debian
- Richard Brown on Distributions are not democracies. Beneficiaries of an open project are not the users but the contributors/maintainers
Differentiated between projects which reinforce the status quo (eg Apache, Ubuntu) and those having technical
committees which are less 'controlled' by the organisation. Usually the motivated rather than the better solutions win?
'democracy is the art & science of running the circus from the monkey cage' HL Mencken. Appeared to want democracy and yet..
- Others with more background have commented on Tristan's talk.

Adding some culinary comments later.. ah yes at last - the first evening we ate Chez Leon - - mussels! Then asagain as the previous year it was to the Sushi train at Kabuki and the last evening we ate somewhere Brazilian near the Codethink hotel - I stayed elsewhere this year, slightly quieter and breakfast was included!
Posted by rajm at 8:38 pm No comments: