It's now over but I've copied the pictures over to an external server rather than have my local server handle the load!
Posted by rajm at 3:39 pm No comments: 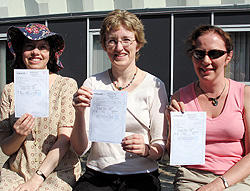 Beth Marshall (on the left, who achieved an A grade), Susan Neville and Lesley Howard who both gained Bs. All of them chose to study just for the pleasure of learning a new language and to be able to put it into practice on foreign holidays. Beth has already put her new skills to use, “I've been doing some research work recently that's involved speaking on the phone to Italians, so the course has been a real benefit.”

Working at the All Saints' holiday club this week run by the Rhema Theatre Company on the theme of Gideon. As we're missing our usual photographer, I'm taking some pictures
Posted by rajm at 6:21 pm No comments: 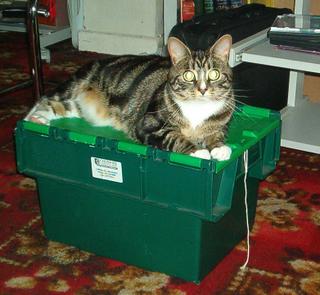 Maybe I should mention the BATS (Books and Things) weblog that I also have, if nothing else it will encourage me to update it more often if I get more hits. Went to the local library yesterday - they have a book sale and walked off with 12 books for a £1 - including Maugham, Marion Zimmer Bradley, Susan Hill, Mary Renault and others - now just have to read them! PIcture is of Hecate enjoying the use of the BATS box.
Posted by rajm at 1:51 pm No comments:

Five posts in a day - whatever next! Uploaded webcam picture looks ok, maybe it's this m/c or apache or png or a combination...
But I need a few more lines of space, so that the right hand stuff isn't obscured - bit more attention to the html and I needn't be doing this.

But at this stage ona Friday afternoon, I feel lazy!
Posted by rajm at 5:19 pm No comments: 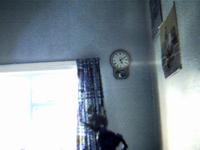 Let's put a picture up here to see if it is ok - it will also push the previous post down a bit so the whole thing looks better! Having problems with the real webcam pictures getting truncated!
Posted by rajm at 5:08 pm No comments:

Another test - bet it will mess up blogger's layout! Seem to have done well on both bits!

Webcam now in operation - at least when I'm logged in on this machine! The image seems not to be transferring fully, but works fine for me using the same webserver - looking into it. Rather unexciting and blurry at the moment, some difficulties getting it work with Linux but I installed the spca5xx kernel module and it worked. I need either a longer USB cable or to move the computer and then I can feed images of the traffic situation at the Hibel Road traffic lights in Macclesfield - the Hibel Rd station is long gone!
Posted by rajm at 9:54 am No comments:

According to today's Guardian

As many as two-thirds of pubs in the most deprived parts of England could be exempt from a ban on smoking because they do not serve food, according to a study by doctors....Leeds topped the league, with 88% of its pubs not serving food and therefore likely to be exempt from the smoking ban, followed by Stoke, Lambeth, Chesterfield, Sunderland, Bradford and Macclesfield.

Interesting that Macclesfield is up there, not really a deprived area, I assume this survey covers the borough as a whole (it's from the BMJ but I can't find it on their web site). Here I think it's more cultural, a very large number of pubs - back in the 1960's I remember counting 50+ in Bollington - so competition constraints don't encourage the serving of food.
It's annoying though for us non-smokers in the area!

I'm sure the blogger spellcheck needs a tweak, place names are always problematic but it suggests misclassified for Macclesfield and Cinderella for Sunderland!

Died this morning, not unexpected but still a great loss to politics and principle - Robin Cook and Mowlam in a month I shall miss them. What with Brother Roger's murder on Wednesday it has been a week of loss.
Posted by rajm at 9:22 am No comments:

You're constrained, you're hemmed in, you're sat on, but you're not trapped. Whatever happens to you, your value is in somebody else's hands, God's hands. Not your achievement, not other people's approval, but something utterly, utterly non-negotiable.

Into Manchester for the evening to have a drink with Greg and Bryan at Taurus, Canal St seems to have changed rather a lot since I was last there, new bars, changes of names, fairly quiet as it was a Monday in August. Lots of folks having an evening meal when I arrived but it then got rather thin until the tap was turned again and there was a sudden influx at around 9:45. Their Montepulciano d'Abruzzo is fairly pleasant - bit strawy though. I'd eaten but Greg ordered a Meze Platter (£12.50) which was huge so we both picked away at it. Mental revisits of cycling in Cambridge back in the 1970's - for me! - pulling up Castle hill, fighting to keep going on country roads when the wind - straight from Siberia was blowing against you. Strange moment early on when some folk appeared in overalls and toolboxes (think Village People!) and opened up a cupboard and started adjusting the lighting, wondered whether they'd stopped paying the bills!

Left at around 10:15 - the train service to Macc is replaced by a bus for the last train (and gets back at 1:15 or something) so didn't want that death march. The next-to-last train wasn't bad seems to be mainly female - maybe it's women who high-tail up to Manchester on a weekday evening, maybe the men are happier drinking and driving...

Had the camera with me but forgot to take any photos!
Posted by rajm at 11:50 am No comments:

from Glimpses of Macclesfield in ye Olden Days published in 1883

From a paper read at a meeting of the Rosicrusian Society, held in Manchester, on the "Historical Memorials of the Church of Prestbury," we find an entry in the churchwardens accounts for the year 1745. "Item - Paid for umbrella for a carriage, 03 00 00." It is hard to imagine the Guards under fire and using umbrellas at the same time. Such a thing, was seen once. During the action at the Mayor's house, near Bayonne, in 1813, the Grenadiers under Colonel Tyling occupied an unfinished redoubt near the high road. Wellington, happening to ride that way, beheld the officers of the household regiment protecting themselves from the falling rain with umbrellas. This was too much for the great chief's equanimity, and he instantly sent off Lord A. Hill with the message, "Lord Wellington does not approve of the use of umbrellas under fire, and cannot allow the gentlemen's sons to make themselves ridiculous in the eyes of the army."

I was actually looking for information on the history of weavers cottages..
Posted by rajm at 8:44 pm No comments:

As commanded!:
The J-Walk Blog: "All you have to do is post a link to this particular blog item (i.e., the one you're reading now). Just call it J-Walk Blog Link Experiment or something like that. After a few days, I'll post a list of every blog I found that linked to this item. If you're not on the list, I'll invite you to send me the link to your entry. I'll post these unfound links, and we'll try to figure out why I didn't find you."
Posted by rajm at 11:33 am No comments:

I suppose I ought to note that the walks are over and the photo log complete. There's various other albums accessible from that machine the index being here, including the recent barbeque and a trip to West Chiltington
Posted by rajm at 9:10 pm No comments:

The Myth of Marriage

Thanks to Maggie for drawing attention to a write up on Marriage, A History: From Obedience to Intimacy, or How Love Conquered Marriage - recently published.
Posted by rajm at 5:05 pm No comments:

.. photographer. I was looking for some more of his Vespa photos - found when I was sorting though an old Independent on Sunday Magazine and found his web site, alas there's only one composite but maybe there's more - ah I've now found the Solomango site which has this page, there's also some nice photography at the Tethys Gallery.
Posted by rajm at 12:42 pm 2 comments: