He decides on the 'Goldberg' Variations. He has four recordings here and selects not the showy unorthodoxies of Glenn Gould, but Angela Hewitt's wise and silky playing which includes all the repeats.

Another teaser from Ian McEwan's Saturday a carefully chosen non-random one - as at the point around where I am in the book there's far too much danger of a spoiler! The main character is a brain surgeon and he's just selecting the music to accompany an operation.
Posted by rajm at 8:30 pm 1 comment:


He watched the strange programmes that the television pumped out in the small hours. Open University documentaries about glaciers.

From Mark Haddon's A spot of bother our book group book of the month like the teaser for last week. For some reason I'm reminded of a Brian Rix farce! Still trying to identify the period, late night OU programmes are reminiscent of a certain era.
(fixed title - was I that far ahead of myself?!)
Posted by rajm at 8:47 pm 3 comments: 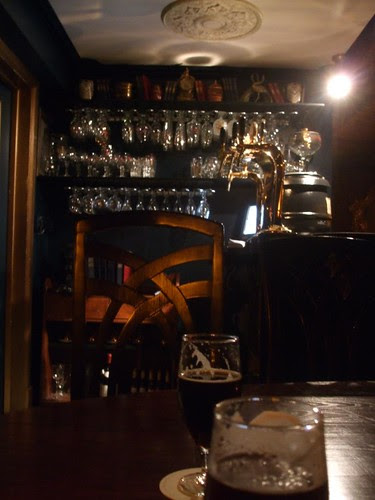 Mort subite - i, a photo by rajmarshall on Flickr.

Back in 2009 I went on a trip with some folk from work to a Beer bar in Altrincham - Morte Subite it has a certain atmosphere - from googling I see thta it used to be the local mortuary! As we were in Altrincham yesterday I paid a return visit, when you get used to the illumination level to be able to read the menu there's a wonderful selection of beers!

Yesterday we went to Altrincham for an Open University day of French Cinema. After an introduction we saw Kaurismäki's Le Havre - here is the trailer A film about and set in the French port of Le Havre, it pays homage to French cinema of the 30-50's as well as merging together the eras! A film about a shoe-shiner and his encounters with an illegal immigrant who is attempting to get to London - it's funny but when you consider the story it's somewhat of an un-funny tale, but that didn't detract from it. Produced by Sputnik films with a dog (a fairly important character) called Laika(!), with a female lead called Arletty (as the 30's French film star lots of scenes and constume reminiscent of those eras. Modern mobile phones abut with phones from the 30's - delightful. I enjoyed the moment after the priests (smoking - as does nearly everyone) have their shoes shined and Monet (the detective in pursuit of the immigrant) appears to go into church and a wooden panelled confessional to be addressed by someone off screen, but after a moment you realise he's in the police station talking to his boss! Delightful!
In the afternoon we had some sessions discussing the film which helped to place the insight of others alongside what I'd seen as well as clips from the related historic films.
Posted by rajm at 6:10 pm No comments:

This week's free word associations from Unconscious mutterings are:
Posted by rajm at 5:53 pm No comments:


Jacob stopped crying. 'Can I have a polar bear drink tomorrow?'

From Mark Haddon's A spot of bother our book group book of the month. Here's the Guardian review - yes I have been wondering about the absence of mobile phones too! I'm also finding the pace a bit relentless, I just wish he'd stop have a look around and take a breather!
Posted by rajm at 8:49 pm 2 comments:

This week's free word associations from Unconscious mutterings are:
Posted by rajm at 7:47 am No comments:

have their dangers! I've not posted a link to a Simon's cat for ages and this one is out today!
Posted by rajm at 5:03 pm No comments:


The judgment doesn't help him deliver the service he needs, for this is his last chance to get back in the game.The ball goes so wide of the wall that Jay is able to step to his left and reach for an easy forehand smash.

A literary game of squash in Ian McEwan's Saturday. An air of menace hangs over this description of the day of the anti-Iraq war march in 2003. I see I've not teased for 3(!) weeks.
Posted by rajm at 8:55 pm 2 comments:

This week's free word associations from Unconscious mutterings are:
Posted by rajm at 7:54 am No comments: