Quoted in a booklet produced by the Duclair Tourist Centre:

It was the month of May; the apple trees in full bloom were covering the yard with a roof of fragranced flowers, and were constantly showering it with a swirling around of pinks leaflets that would fall endlessly on the people and on the grass
Guy de Maupassant

and such an easy slip to make when translating. If anyone can trace the source of the quote, I'd be grateful! Miss Harriet - seems close but I've not yet found the French original.
Posted by rajm at 10:45 pm No comments:

.. sounds a bit like a early teen September essay!

Started with Loose Canon edited by Damian Thompson - a portrait of Brian Brindley. One of the characters of the 1970's General Synod. I'm not sure that the book helps you understand Brindley better but there some wonderful details - like faxing huge documents of &'s just for the fonts.. owned a cat called Judith with Holofernes the poodle. I regret I never visited Holy Trinity when I lived in Reading though in some respects I'm sure I would have hated the experience!

Then I picked up David Mason's The Piano Tuner in the local Oxfam shop, as I read I wondered whether this was too Maughamish - innocent colonial seduced by a woman and the spirit of the East but I think the ending convinced me that this was not quite so! Daniel Mason, spent a year studying malaria on the Thai-Myanmar border.

Le Scaphandre Et Le Papillon (The Diving Bell and the Butterfly) by Jean-Dominique Bauby - read this in French though I could have done with taking a dictionary with us! I mean to re-read it with the aid of one! Bauby was editor of Elle and suffered a stroke which led to 'locked in syndrome' and the book was dictated using one eyelid. Reflections on the ordinary from an extraordinary situation. I talked about it briefly in my sermon this morning and a few minutes later there was a butterfly fluttering right in front of me as I talked - unfortunately I wasn't alert enough to link it to the book I'd just described, or wonder if a diving bell was about to descend from the ceiling a la Tom and Jerry!

The final book was Sunetra Gupta's The Glassblower's Breath - the author divides her time between writing and researching infections diseases - maybe you see the unconscious pattern of book selection here!? I've not finished it yet and am still trying to work out whether or not I can handle the - to me - rather off putting style! An Australian site has a transcript of her talking about her writing style

separate customers dropped and broke two bottles of red wine in front of my checkout - and a third nearly also had an accident - again with a bottle of red. I think I preferred the bouquet on the first.
Posted by rajm at 8:06 pm No comments:

Some photos of emacs (!?), Chichester and Normandy taken on our recent break, have been put on my local webserver, when I've tinkered with them enough, cut out duds and duplication I'll move them somewhere more easily accessible...they include trips to Honfleur home of the Maisons Satie, Rouen and Monet's Garden,Giverny.
The above picture was taken by the Seine on the 14th July - but I see from googling that Ronceray is a dredger so maybe being low in the water is by design!
Posted by rajm at 8:55 pm No comments:

I seem to have been away... 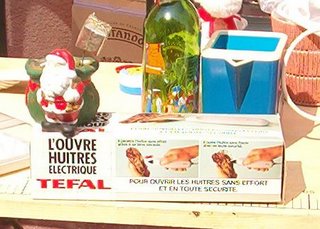 .. and while I get myself organised for some reflections, here is a picture I took from a quatorze juillet 'foire a tous'. Hadn't seen one of these before - no not the Father Christmas! - maybe I've been missing out - but IMHO something for the man who has everything.
Posted by rajm at 3:54 pm No comments:

Change of the seasons 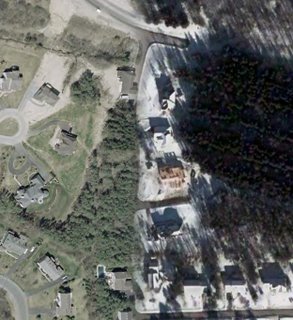 The joins are always the most interesting part - and in this snapsot from google world there's a lovely conjunction of the seasons, winter and something else right next to each other. Reminds me of something not sure what, Dr Who, Narnia,...
Posted by rajm at 4:10 pm No comments: