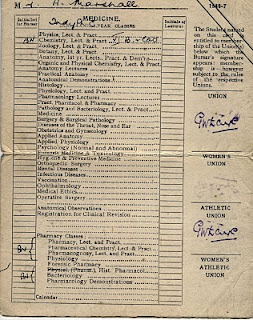 Among my Dad's papers we found this University student card - Manchester University in the 1940's. You'll see there are separate unions for the men and women. Interesting there's no mention of it being the 'Victoria University of Manchester' and the spaces for authorisation of each course by initials. The space for the initials of the lecturers being blank - did the lecturers not hold with such bureaucracy?
A written explanation was required on absence from lectures!
Posted by rajm at 2:29 pm No comments:

Once the girl nearly slipped, but she recovered balance by knotting her hand in Kingsley's hair.
'Stop pulling my head off,' he grunted.
'Sorry, I knew I shouldn't have drunk so much gin.'

Not what I remembered the book for, but this is from Fred Hoyle's The Black Cloud, which I'm currently re-reading. A classic piece of science fiction by a scientist, I first read it back in the early 1960's and loved it but I've missed out on reading it for many years, a welcome reacquiantance - and the descriptions of early computing technology are there to savour - for me at any rate!
Posted by rajm at 5:04 pm 1 comment:

Hints for the Busy Housewife

I have - recovered from my mother's collection of old books - a pamphlet (48 pages) called `Hints for the Busy Housewife' being the reprint of 1936 (Ninth Edition 1935) published by the Health and Cleanliness Council. A few extracts will give an indication of the style!

By carefully choosing her washing and cleaning materials; by using modern equipment whenever possible, keeping it in the best possible condition with cleanliness and care; by careful planning of daily routine; by taking thought for her personal hygiene and appearance - the happy housewife is never without a clean bright overall-the housewife can do much to make her housework no longer a depressing labour but an interesting and pleasant duty.

I've afraid those are my italics..

Children should be led to regard the cleaning of their own boots and shoes as one of the little household jobs in which it is their pleasure to assist. If thus encouraged, they may even cooperate to the extent of keeping father's boots clean for him.

anything rather than the father having to do them!
Posted by rajm at 3:24 pm 2 comments:

Via Elizaphanian, "The rules: Don’t take too long to think about it. Fifteen films you’ve seen that will always stick with you. List the first fifteen films you can recall in no more than fifteen minutes."
In no particular order (except that of recall

Wanted to quote the film about the boys finding a pile of cash but couldn't remember the title, oh and The Closet (Le Placard) but this is cheating. Consider yourself tagged!
Posted by rajm at 11:47 am 1 comment:

This week's free word associations from Unconscious mutterings are:
Posted by rajm at 8:09 am No comments:

A bit of indulgence for Christmas Eve

The Enid Live at Hammersmith Odeon 1979

I came across The Enid back in 1978 as a result of listening to a Radio 3 alternative music programme (I can't remember the name of the programme now - any offers?) and was intrigued by the mixture of symphonic rock, fairground organ and Elgar(!). So I acquired 'Touch Me' and got around to re-listening to it yesterday. A bye-gone era - though they seem to be still touring indefatigably - the youtube extract is live - enjoy it. I've never been to one of their concerts but one of the PhD students when I was at Manchester Computing dept in the 1980's assisted with getting their stuff on the road (AFAICR, Richard something..) and he was amazed that he'd found someone else who had heard of them!
And for another sort of seasonal indulgence here is Messaien's 'Dieu parmi Nous' played on an accordion(!) - brilliantly - well worth the watch - I've tweeted and facebooked it - having been pointed to it by Patrick Herring so I'm not going to make a separate post of it!
Posted by rajm at 10:16 am No comments:

Whilst down in Sussex a fortnight ago I picked up a copy of Heart of West Sussex - a local Christian newspaper, it contained this quote from George Carey:

Now there was hostile opposition to the Christian message and our values, demonstrated in newspapers like the 'Independent' and 'Guardian':`Words like 'evangelical, Bible, traditional values, faithfulness in marriage, worship' are boo words. Religion is despised.

(apparently from the Bognor Bible Week). I think Dr Carey has been spending too much time reading commenters on the Guardian web pages the free-for-all forum - I don't recognise that description and I am not ashamed to be either a Christian or a Guardian reader (I read the Independent too, on Sunday). I note the scare quotes around the newspaper names in the quote!
Posted by rajm at 9:47 am 1 comment:

The mother tries to tempt her many daughters with exciting present ideas - including a steam hippopotamus - but it always comes down to them wanting another sister (or two!).
The tone is a bit harsh in this performance but it is a wonderful rendition!
Posted by rajm at 11:42 am No comments:

For friends who don't follow my feed on identi.ca or twitter or other social media.. our Christmas newsletter is on the web as a pdf - I guess most of it has appeared on this weblog at some time or another, not a terribly entertaining read this year I'm afraid.
This month also marks 40 years since I had my first job in IT - working as part of OsTech at ICL Kidsgrove, as a pre-university trainee, where I was thrown into simulation and a high level language (S1) which allowed insertions of a lower level language - for things like I/O - it must have been a scary start but I still appear to be here and, more or less, connected to the industry!
Posted by rajm at 7:47 pm No comments:

I know this has been out for over a week and, so far 1600000 of you have already seen it - but I was away last week so the twitter update was missed and I've only just seen this - so you might as well enjoy it again!
Posted by rajm at 1:34 pm No comments:

Renzo bowed deeply, the doctor greeted him affably, with the words 'Come in, my lad' and took him into his study. It was a huge room; three of its walls were occupied by portraits of the first twelve Roman emperors, and the fourth was taken up by a vast bookcase full of dusty old volumes.

Renzo's visit to a lawyer (Dr Azzeccagarbugli is his name in the original, thank goodness for copy and paste!) from Manzoni's classic The Betrothed (I Promessi Sposi).I first read this many years ago and it is about time for a reread. Manzoni is the first true classic novel written in the Italian language amist the turmoil which led to the founding of the modern Italian state - his death provoked the writing of Verdi's Requiem (which coincidentally I'm listening to at the moment).
Posted by rajm at 8:22 pm 3 comments:

This week's free word associations from Unconscious mutterings are:
(comes a little late I'm afraid!)
Posted by rajm at 2:22 pm No comments:

He sent humorous e-mails to Andy Warshaw, his tireless friend in Lincoln's Inn; he made sure he didn't subscribe to the Eustace Hutton view, that the modern world, with its short-termist, ignorant politicians was something to be mocked. He was careful not to slip into the Inner Temple way of talking, with its clubbish phrases, mispronounced Latin tags and unvoiced conviction that its members were cleverer than the rest of the world.

This month's book group book - acquired last night. Sebastian Faulks' A Week in December at the moment it feels a little too determinedly up to the minute - but early days yet! We shall see! Appropriate for the season but I think it wil take a little longer than a week to read it.
I still need to finish Faulk's Charlotte Gray which I started months back - it got swamped by other things and I need to get back to it!
Posted by rajm at 5:02 pm 4 comments:

The death has just been announced of Hugues Cuénod at the age of 108. He was part of the original cast of Stravinsky's Rake's Progress in 1951, he sang in Krenek's Jonny Spielt Auf in 1928 (the French premiere). I posted him singing Poulenc's C last year but this seems a good opportunity to repeat that post.

There's a good long gap before the song starts (c 25 sec) but it is worth waiting for - one of my favourite Poulenc songs!

a lament on the fall of France in 1940, written and first performed to an audience including German military during that war.
I'll add a link to an obituary when there is one (but in view of his age I guess there's lots prepared) - and here's the Guardian's obit.
Posted by rajm at 4:44 pm No comments:

inside Lastingham church
Originally uploaded by rajmarshall
Our mother/mother -in-law/grandmother, Elsie Marshall, died on 26th November 2010, the funeral will be at St Mary's Church, West Chiltington on 10th December - all welcome.

Robert and Beth Marshall, John and Jenny Marshall
Kate, George, Clare and Chris.
Posted by rajm at 4:51 pm No comments:

My mood was considerably lightened this week (I'm still stuck in a non-payment situation with a contract I worked on from June-October this year and which is, nominally, still on-going, so far I've received no money at all. Also, my mother died 10 days ago and I'm in the gap between the death and the funeral) when I read this bit from Giles Fraser's tribute to Colin Slee in the Church Times:

My favourite Colin Slee story involves his campaign against the swingers’ sex club that opened just a few yards from Southwark Cathed­ral. In his office, Colin had rows of box files marked “Club Wicked”. He was gathering the evidence that he needed to close the place down — which is what he eventually did.
In the course of this campaign, he hired a couple of private investiga­tors to go into the club one night and record what they saw. That par­ticular evening had a costume theme. To those who frequented Club Wicked, that meant leather and rubber bondage gear. But the private investigators thought it meant fancy dress. They turned up as two of the three Musketeers. I would often tease him about this.

Jeffrey John's sermon at Colin Slee's Requiem Eucharist is here and is worth the read!
Posted by rajm at 1:25 pm No comments:

This week's free word associations from Unconscious mutterings are:
(what's happening - firefox is underlining everything as being mis-spelled!)
Posted by rajm at 11:34 am No comments:

Another snowy morning
Originally uploaded by rajmarshall
Looking over Macclesfield on the very cold morning which was Friday.
And a thought:

Not sure of the author - Harry Williams?
Posted by rajm at 8:39 pm No comments: