This week's free word associations from Unconscious mutterings are:
Posted by rajm at 7:56 am No comments:

A notification for the locals that the All Saints' website has moved and can now be found here
Posted by rajm at 1:48 pm No comments:

This week's free word associations from Unconscious mutterings are:
Posted by rajm at 7:40 am No comments:


Frau Anderson is a woman in her mid-fifties. It is hard to tell what she really looks like because she is wearing makeup to disguise.

From Anna Funder's Stasiland - a series of stories told by those who lived in the former East Germany under surveillance of the Stasi. This is our book group book of the month and I'm beginning to get into it, bureaucracy gone mad (even after unification)...! Here's a review.
Posted by rajm at 2:23 pm 2 comments:

From a post on Ecclesia commenting on 'The(?) Evangelical Group of the General Synod calling for licensed lay people as well as clergy who contract marriages to people of the same sex to be disciplined:

Its letter describes its own perspective as “biblically orthodox” and refers to “the clarity of Scripture and the vision it offers for human flourishing”. Yet interestingly it seems less interested in punishing those who are unjust to the poor, migrants and others who are vulnerable, a matter on which the Bible is a great deal more clear and consistent than on homosexuality and gender identity. Nor does it acknowledge the hazards of being judgmental. Overall there is a notable lack of awareness of the risks of projecting human bias on to God.

Well quite, blinkers to avoid frightening the horses. I'm reminded of a certain Reform fanboy church not to far from here who seem to only focus on a few bits of Christian ethics. I wonder if one of their parishioners still reads here ;-)
Posted by rajm at 2:16 pm No comments:

The last Silkscreen film was The Wave based on the story of a simulation where students are asked to cause pain to someone else but because they're asked by an authority figure - an apparent scientist - it must be ok. This film places the action in a school where the students are undertaking a political studies course where things become rather too real.

I found it very difficult to suspend my disbelief - the group coalescing in less than a week, but maybe I'm sceptical about group think! Or maybe like the students at the start of the film I also think we're beyond than? Here's a review.
I was reminded - at a certain point - of the scene in 'The White Rose' where other students put subversive literature in a university..
Posted by rajm at 1:23 pm No comments:


Incidentally he gave me to understand that Kurtz had been essentially a great musician. 'There was the making of an immense success,' said the man, who was an organist, I believe, with lank gray hair flowing over a greasy coat-collar.

Joseph Conrad Heart of Darkness - I've never read this before and wanted to after reading Anne Patchett's State of Wonder about a similar journey into the interior. I found it difficult to get into the Conrad, there's so much that's allusive and interior in it, I think I'll have to reread when I'm paying more attention!
That is a totally random choice of sentences but when I read them I was reminded of Albert Schweitzer another westerner and great musician (organist), theologian.. who lived in Africa for many years.
Posted by rajm at 3:31 pm No comments: 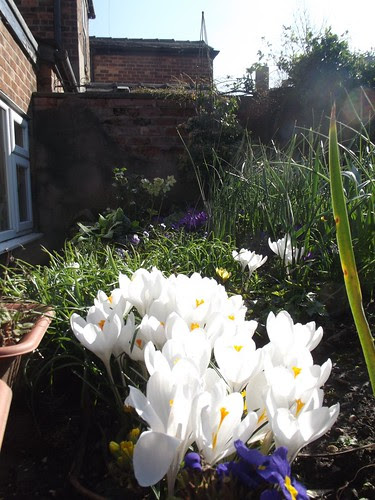 It feels like spring is on the way - a view of our garden after lunch today. Another photo here

This week's free word associations from Unconscious mutterings are:
Posted by rajm at 8:07 am No comments:

You need to recompile the kernel

I was searching through some old papers this morning and came across a document describing how to set a Linux machine up to retrieve email from freeserve. In amongst the 10 pages (or so) was this gem:

So if you didn't have the dummy interface and didn't have ethernet (fairly common in those modem based days) you needed to recompile the linux kernel to enable it. I sign of how far things have moved since then! It then goes into the gory details of sendmail....
Posted by rajm at 1:45 pm No comments:


Yet I knew, as I stood there, that I had, in loving Etna, touched something extraordinary in myself. It was the one occupation that had engaged all of me: my senses, my intellect and my emotions.

Anita Shreve's All He Ever Wanted our book group book of last month. I started this with a particular image of what I thought it was likely to be like 'chick lit' and was pleasantly surprised, though it is an uncomfortable read - a pompous, egotistical man's view of a marriage back in the early years of the 20th century. (Etna is the name of his wife!).
I'm not doing well at tuesday teasers (or blogging) at the moment, let's hope things improve and I find some impetus!
Posted by rajm at 8:31 pm No comments:

This week's free word associations from Unconscious mutterings are:
Posted by rajm at 7:41 am No comments: