My line manager is Spanish and I've had a standing invite to go and work at his house in Málaga for a few days and this year once the hot weather had mostly receded, Beth and I took up the kind offer. We flew initially to Granada and had a couple of days with a trip round the Alhambra and then a bus ride to Málaga and some work. Though it wasn't without enjoying the beach side location and the chiringuitos (restaurants along the shore). Some warm weather away from the rain that week - and some serious unrushed conversations. The photo album is here and there were the sardines.. 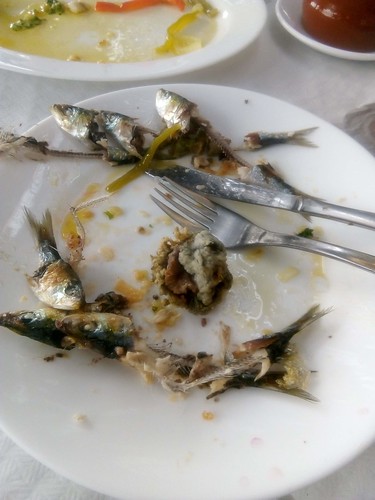 - lots of great memories from both parts of the trip.
Posted by rajm at 7:25 pm No comments:

This week's free word associations from Unconscious mutterings are:
Posted by rajm at 3:21 pm No comments:

Last week's free word associations from Unconscious mutterings are:
Posted by rajm at 8:58 pm No comments:

I've recently returned from a week at the Chetham's Summer School for Pianists. I've not been before and was treated as a unseasonal Christmas/birthday present from Beth.
It takes the form of a number of lessons with an assigned teacher - I was on the amateur course though I don't think there's a hard and fast division between that and the more skilled course. There are 2 or more (piano!) concerts every night and possibly a talk. There's workshops in the afternoons and you are assigned a practice room which I shared with 2 others though we never saw one of the people and clashes were not a problem. The practice piano was a little bright and I often found a teaching room that wasn't being used.

I booked late and being local I decided to attend as a non residential. This involved a lot of early morning travel and as the course was over the bank holiday and I was trying to use the train things were a little disruptive, also concerts often went on after the last train, so I missed some of these, though the days were very intensive so an early night was welcomed! My lessons were with Marta Karbownicka. I brought along a number of pieces that were in various stages and found the lessons of benefit in all cases - well apart from one where my playing and understanding of the piece just fell apart (the Fauré 11th Nocturne) but the Mompou, Scriabin, Ravel and even the Rachmaninov Etude that I've been given by my teacher - maybe as summer work - so was at an early stage - went well. There were also workshops with Marta. All the lessons and workshops are open so you can benefit from teaching from a whole range of very experienced, and in some cases, very well known pianists.

Frances Wilson gives some useful advice on preparing and attending. There are a huge number of attendees, maybe it's more useful to be residential so you get to know people more quickly especially over meals! I spent the last night with a room I requested during the course so I could hear all the last nights events - including the cabaret - which in some years has gone on until 1am - thankfully not this year!

I found that a lot of the larger workshops on the amateur course clashed with my lessons/teacher workshops so I missed on some of the experience on playing to larger groups but I was kept very busy. Before I went I thought that asking for a 2 hour use of a practice room was hopelessly ambitious. But lots of practice was done - with an absence of most other distractions and my playing improved. I also had useful discussions with Marta over repertoire for the ARSM diploma I'm hoping to take.

Maybe more reflections to be added - work in progress!
Posted by rajm at 5:46 am No comments:

This week's free word associations from Unconscious mutterings are:
Posted by rajm at 9:13 pm No comments: