This week's free word associations from Unconscious mutterings are:
Posted by rajm at 7:55 am 1 comment:


Although he was drunk by this time, Bataille managed to work out that the final number of devils and she-devils totalled fourty-four million, four hundred and thirty-five thousand five hundred and fifty six. We checked his calculation, admitting with surprise that he was right, while he banged his fist on the table and shouted, ``You see then, I'm not drunk!'' And then he was so pleased with himself that he slid under the table.

A final taster of Umberto Eco's The Prague Cemetery - a study of conspiracies and paranoia! (I've very glad my random page wasn't 365 where there's a 16 line sentence full of obscure proper nouns!)
Posted by rajm at 7:36 pm 1 comment:

On Saturday we had a trip out to Holmes Chapel to hear Nickolai Demidenko performing at the Music Society there. We turned up on spec - our local music society often suffers from poor numbers - things were rather different on Saturday - we guessed that there isn't the musical competition that there is within Macclesfield - and the closer link to Manchester. We were put on a waiting list until they checked that full season ticket holders didn't seem to have turned up. So we were lucky!
It was an all Schubert recital the Impromptus D899, the 3 Klavierstücke D946 and the C minor sonata D958. Concentrated interior pieces (maybe that goes without saying with Schubert). I used to attempt the Klavierstücke and they're very strange works with stabbing chords and rhythms, there's a set of podcasts on the Guardian Website from Paul Lewis which are worth hearing. Both the middle one of the Klavierstücke and the last Impromptu have excursions into the wild key of Ab minor, Demidenko played these works with a intimacy and control. Then the C minor sonata which I remember for the seemingly endless loop of the finale - Beethoven looms large here (throughout the sonata) but it's taken in Schubert's own direction and the finale almost manic obsessive rhythms were powerfully communicated.
Demidenko played the same concert at the Wigmore Hall last night - the Independent review is here - I don't find exuberance in that final movement - and we got an extra (3rd!) encore of a Glinka Farewell - all the encores having a Russian connection.(A review from the Guardian has now appeared)
Posted by rajm at 12:56 pm No comments:

This week's free word associations from Unconscious mutterings are:(June?! where was I yesterday morning??!!)
Posted by rajm at 7:42 am No comments:


John Cage's Living Room Music performed by the Conservatorium Van Amsterdam X'q Percussion Quartet. I don't think I've heard this before and it made for an absorbing lunchtime listen - though I'd put the crockery away...
Posted by rajm at 12:57 pm No comments:

This week's free word associations from Unconscious mutterings are:
Posted by rajm at 11:30 am 2 comments:


I am sorry to be so indelicate, especially as Diana is, one might say, a charming woman. In my view, in this state, she is suffering the effects of trausmas inflicted upon her during her adolescence, and tries to escape those memories by entering periodically into her second state.

I'm sure that teaser is very annoying as a chunk with no context! Umberto Eco's The Prague Cemetery, conspiracy theories...and the Protocols of the Elders of Zion. The Guardian review says:

Eco has said, a little snottily, that he wants to appeal even to those who have the bad taste "to take Don Brown seriously".

and A S Byatt in the ft review (you need to register to view..) comments:

This is a scorpion of a novel. It waves its pincers with menace and is about things that could really hurt. But I am always surprised by dead scorpions, which are papery shells with no blood or soft tissue. This novel is a bit like that.

The seed of change

Cold pavement indeed
the night you died,
murdered;
but the airborne drop of blood
from your wound
was a seed
your mother sewed
into hard ground –
your life's length doubled,
unlived, stilled,
till one flower, thorned,
bloomed
in her hand,
love's just blade.

Stephen Lawrence by Carol Ann Duffy from the Guardian
Posted by rajm at 5:43 pm No comments:

This week's free word associations from Unconscious mutterings are:
Posted by rajm at 11:44 am No comments:

The Silk Screen's film on Wednesday was Mike Leigh's another year - here's the trailer:

I thought it was a very gentle film, viewing relationships between the central couple and their friends through the seasons - lots of horticulture and horticultural metaphors! There was maybe not so much a sense of charicature as in some of Leigh's films affectionate without guying too much (cf Happy Go Lucky). Here's Peter Bradshaw's review from the Guardian. (The review says that the funeral takes place in a Lancashire town - I thought it was meant to be Hull, was I confused or not concentrating?) Lots of wine drinking - recommended!

Look at this shit they're giving us to eat. Half-mouldy cheese and bread like a stone. Reminds me of the famine back in '27 when I was a child.

A conscript grumbling about army food in a last (I hope! 600+ pages and nearing the end!) teaser from C J Sansom's Heartstone.
Posted by rajm at 8:51 pm 2 comments: 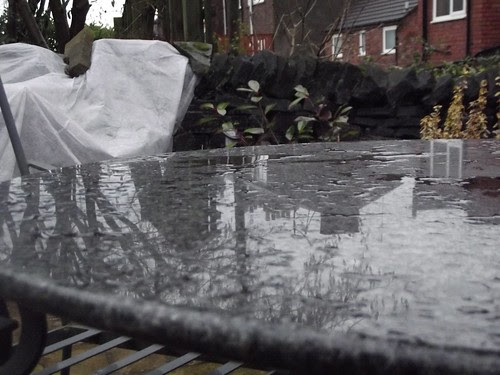 Drops of water, a photo by rajmarshall on Flickr.

I'm meaning to take a few more pictures this year for the blog and combine it with a bit of walking - today however the weather was a little too exciting and a garden picture in today's wild weather will have to do! Large drops and a reflection of the trees in the table.

..and not treating them as a problem. Rowan Williams' New year message.
Posted by rajm at 5:54 pm 1 comment:

This week's free word associations from Unconscious mutterings are:
Posted by rajm at 9:01 am No comments: