Go to Mad Priest's blog to see this!
Posted by rajm at 7:49 pm No comments:

It can be exciting at Macclesfield station!

Under the headline 'Shepherd's' racial abuse heard by his festive flock, we have:

A “SHEPHERD” – who had been on a festive day’s drinking binge in Macclesfield with “Jesus”, The Grinch and an elf – hurled racial abuse at an Asian railway porter before violently swinging his crook at him, a court heard.

Read the full story at the Macclesfield Express - and I thought it was going to be about vicars...wish I'd been there with a camera, unpleasant as it must have been.
Posted by rajm at 7:45 pm No comments:

Just received notice of an event at the Alliance Française in Manchester where Cécilia Lyon is going to talk about the artist Adolphe Valette a French view of early 20C Manchester murk.
Also - now long gone - but we attended the showing of 36 Quai des Orfevres at CineMac - a pretty violent film for a 15 certificate - though I gather 15 is the top age limit in French certification so maybe the BBFC just copied the rating! Ienjoyed the film despite the violence - and don't start to fidget when you think the film may be ending - at the point it is just getting into its stride! The Guardian said

France provides a corking blockbuster of its own, as Gérard Depardieu and Daniel Auteuil duke it out in Heat-like corrupt cop thriller, 36 Quai des Orfèvres.

I feel like adapting that description into a conking blockbuster in view of the splendid noses on display, sometimes one got confused as to which villain was getting beaten up but I found it very emotionally involving. Try the review here for a more jaundiced opinion - but maybe i just enjoy soupy melodrama! Another review may have some spoilers for some twists in the early part of the film.
Posted by rajm at 10:38 pm No comments:

Looks like I'm back in business - not sure how it was fixed but it involved some combination of flashing the router with new firmware, saving the router state to disk first and then reloading the settings and finally running the connection wizard. Sorted, but I'm none the wiser and not sure what the prognosis is for that piece of hardware.
I had a spare router left by my brother-in-law when he emigrated but no lights came on when I applied power, so I assume it is even less of a working piece of hardware than this one!
Posted by rajm at 7:11 pm No comments:

My router died last night - while I'm trying to rustle up an appropriate liturgy for the internment, you're only likely to get any responses to emails to me if you use my gmail address...if you don't know it, comment on this post (in vague terms if you don't want to broadcast the request!!) and I'll get back to you!
Posted by rajm at 1:45 pm No comments:

from the office window 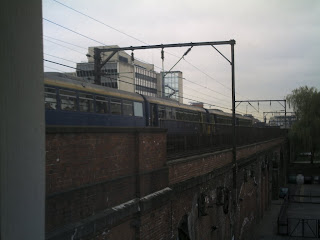 been in the new job for nearly two weeks - as you see it's rather close to the railway! Good job I'm not a trainspotter!
Posted by rajm at 7:22 pm No comments:

Where will it end?

I use SpamAssassin to filter my email and direct those with a score of more than 15 to a separate mail bin which I inspect rather cursorily mainly to see if an email has exceeded my current record score, I last emptied it on Sunday evening and this evening there are 1400 new mails in it - and that's excluding email that I delete before pulling it off the POP server (using mailfilter).
More seriously there's Sheila N. McJilton's poem April Gun Metal Morning on the events on Monday in the US.
Posted by rajm at 8:58 pm No comments:

Spent the afternoon digging out - not before time! - the rock garden hopefully it will end up replanted - and pictured - soon.
Was greatly amused by a few cartoons this week top of the heap was today's Doonesbury - beware the annoying <ping> as the page loads! And then there was Clare in the community
Posted by rajm at 9:02 pm No comments:

I hope she'll sing something nice at the wedding

The really important news of the day.
Posted by rajm at 10:08 pm No comments:

First comes Max on Blair and the dumbing down of music

Some months ago, Buckingham Palace gave a magnificent reception for "the music industry", and it took some persuasion to include in this "the music profession", so one begins to understand how far purely commercial values have penetrated.

When Alexander Goehr, John Ogdon, Harrison Birtwistle and I were students in Manchester, we were summoned all together to the Principal's office in college, the day after a Manchester Chamber Concerts Society evening had finished with a very funny Haydn finale. It had been impossible not to smile, and even laugh, discreetly. We were told our behaviour was unforgivable in a serious concert, and that we were a disgrace to the college, and should have more respect for the composer and the string quartet.

- though I think I've heard that tale before - but the whole lecture is worth a read - probably preaching to the converted though!
And then there's this unfortunate tale - reminiscent (to me anyway!)of that wonderful Prom back in the 80's when the piano lift wouldn't work and the Bartok Piano concerto was long delayed - can't find a link but the announcer marking time was heavily featured in the Three and the Third feature marking 60 years of the Third Programme which can still be found, here, on the BBC web site.
Posted by rajm at 8:41 pm No comments:

'On an overgrown path' has this

Brady juxtaposes post-revolution, modern Persian art with the inherent homoeroticism present in some classical Persian art. He explains that there is “this love for other men in their culture that is really denied today. Look,” he continues, “you have this in your culture, you should embrace it.”

but instead the piece tells the story of the judicial murder of two gay youths.
So many conflicting emotions for me about Iran at the moment - there's western demonisation and there's also the fundamentalist Islam side.
There's a few other good recent postings at that blog including - compare and contrast(!) - this article on the Orthodox Liturgy
Posted by rajm at 9:04 pm No comments:

Thanks to Storyteller's World for the link to the Observer article. Harries writes of Williams:

One of the threads running through his writing is the idea that true religion always leads one to question oneself, rather than make claims over others. Jesus is not a possession or a badge of superiority, but the one before whom you stand, in gentle self-questioning.

It was on the Friday that they ended it all.
Of course,
they didn't do it one by one.
They weren't brave enough.
All the stones at the one time or no stones thrown at all.
They did it in crowds ...
in crowds where you can feel safe
and lose yourself and shout things
you would never shout on your own,
and do things
you would never do
if you felt the camera was watching you.
It was a crowd in the church that did it,
and a crowd in the civil service that did it, and a crowd in the street that did it,
and a crowd on the hill that did it.
And he said nothing.
He took the insults, the bruises,
the spit on the face,
the thongs on the back,
the curses in the ears.
He took the sight of his friends turning away, running away.
And he said nothing.
He let them do their worst
until their worst was done,
as on Friday they ended it all ...
and would have finished themselves had he not cried,
'Father, forgive them ...'
And began the revolution.

According to http://www.falmouthcongregationalchurch.org/Sermons/GoodFriday.htm it is from:
Iona Community, Wild Goose Worship Group, “It was on the Friday,” Stages on the Way, Chicago, IL: GIA Publications, Inc., 2000, pp.159-160
Posted by rajm at 10:22 am No comments: 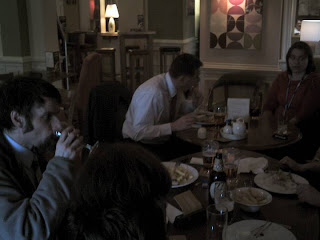 Yesterday was my last day contracting for Siemens and I took the camera to the pub for the final lunch. The full album is here - at least the not so dark ones!
Posted by rajm at 7:22 pm No comments:

If it's Good Friday..

then it's an afternoon walk -blogged on the All Saints' blog. Larger versions of the photos on request!
Posted by rajm at 7:10 pm No comments:

Due to this Mad Priest post
Posted by rajm at 7:32 pm No comments: 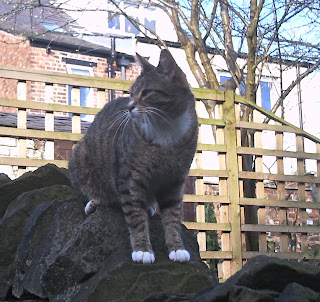 My other camera has been playing up so I've acquired a new cheap one and here is some kitty p*rn of next-door's cat.
Posted by rajm at 11:38 am No comments:

I've found this patch to wine and now i'm no longer having to shade and unshade terragen2 to see what I'm doing when running under linux - latest render... 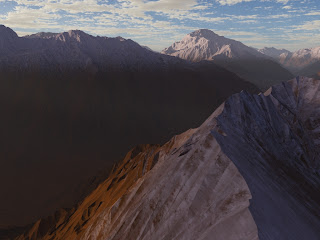 makes things a lot easier!
Posted by rajm at 5:11 pm No comments:

Our book group meets tonight to discuss Bruce Chatwin's Utz - blogged here - are there any novels with shorter titles? It tells the story of Kaspar Joachim Utz who collects Meissen china - valuable because it is a collectors item, he lives in Prague during the Cold War, has chances to escape to the West but returns because of his collection. A beautiful book written during Chatwin's final illness his musings on the value of art. When Utz dies his collection mysteriously disappears.
Meanwhile in rec.music.classical.recordings there was an Alan M Watkins who assiduously collected Joyce Hatto CD's - which now turn out to be collectors items because they were collectors items, he recommended them to the newsgroup to buy on numerous occasions. Alan purported to live (or have lived) in Prague where he played percussion for some orchestra during the Cold War - which he clearly didn't need to do. Since the scandal broke he seems to have gone missing in action!
I've also just remembered the scene with Marta bashing saucepan lids together like cymbals to obscure the discussion about how much the china is really worth

Is the Chatwin an inspiration for the jape - or is this more material for the conspiracy theorists?
Posted by rajm at 2:42 pm No comments:

A moment of passing


from this posting. After a brief spell using rn I used anu-news for a few years when I was manager of a microVMS system in the late 1980's. I downloaded the source - you didn't often have non-OS pre-built packages on non-PC's in those days, found bugs in it messed around with the code - used it to post messages - of course (I see my phone number was in that message - trusting days...) after that I moved on to GNUS and then gnus which I still use but there's a moment's regret at the coming passing of an old friend to the great newsgroup in the sky.
Posted by rajm at 8:28 pm No comments: