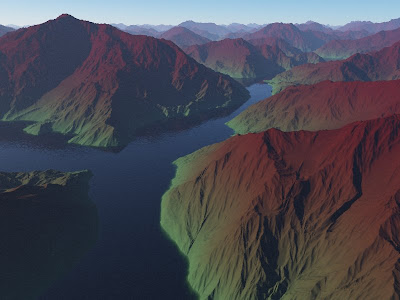 Not uploaded one of these for quite a time - but now have wine, nvidia and mandriva working well again and can run terragen under wine. This needs a bit more work - on the greenery I think as well as a more interesting sky - though this one took around 30 hours to render - and slightly slowed the machine down too!
This is with the latest terragen 2 beta.
Posted by rajm at 6:30 pm No comments:

Rackhams and the Craven Herald

I see that Skipton High Street is up agains two London Streets for the title of Britain's Greatest Street - I have fond memories of spending day's off in Skipton...and here's the Craven Herald article
Posted by rajm at 6:51 am No comments:

Theologian in the fast lane

This is coming at a time of rapid changes that are in direct contradiction to the tenets of Christianity. Especially the global emergence of fast lane theologians and revisionists who deny the uniqueness of Jesus Christ, mass fraud, embezzlement of public fund by those in government, homosexuality, lesbianism and the wanton destruction of lives and property.

There's a petition modelled on the one that a large proportion of the women clergy of the CofE recently signed offering lay support for their position. It's here - Support Women Bishops - Laity if you're a lay member of the Church of England and in support of this please sign!
Posted by rajm at 9:32 pm No comments: Springwatch
Originally uploaded by rajmarshall
we're getting the bird table ready! Some with more anticipation than others.
Posted by rajm at 3:15 pm No comments:

Probably NSFW! Dangerous to your health too!
Posted by rajm at 3:13 pm No comments:

A bit of History

John Cleese's biography of Oliver Cromwell set to the Chopin Ab polonaise. I shall have the words (and music) haunting me for the rest of the day.

I hope you've all been educated - if you visit the link!
Posted by rajm at 1:57 pm No comments:


Next weekend is complicated so I need to make sure I book a time to see the two parter!
The Arthur C Clarke reference was noted!
(trailer via Peter Ould)
Posted by rajm at 1:45 pm No comments: Birdwatcher
Originally uploaded by rajmarshall
Getting some of the b/w photos scanned. The Epson scanner appears to work with Ubuntu but I'm still having problems getting it to talk to this (my Mandriva) machine.
Oh, the photo is Domino getting used to the yard in the Victoria and Consort area of Leeds 3. She was a wedding present...unfortunately she didn't survive the cars long when we moved across Headingley to a busier area.
Posted by rajm at 1:08 pm No comments:

more cat pictures - from LOLcats
Posted by rajm at 8:52 am No comments:

There's a pretty good example of why the global warming nay-sayers are indulging in either fooling themselves, or their readers, on the RealCimate website here. Needs some careful reading, though those who want to take the easy option and don't want to bother their heads about science will no doubt cling to the option that doesn't challenge their comfort zone.
Pointed to it by Elizaphanian.
Posted by rajm at 6:10 pm No comments:

Just noticed that Kenneth Williams died 20 years ago last month - how have we done without him for 20 years (oh bang goes my non-adult blogger listing). I've just listened to 'The Celluloid Jungle' which I see dated from April 1968..
sorry for any typos in the above firefox is acting (nasal whine) strangely.
The title of this post might well do as an epitaph for Eurovision - though it was uttered by Horne rather than Williams!
Posted by rajm at 3:07 pm No comments:

is here. Something leads me to suspect that it is unofficial :-)
Posted by rajm at 12:19 pm 2 comments:

Firefox (rc1) just crashed while viewing OCICBW's unsuitable Swedish photos - on restarting there were various available updates for my addons one of which was a 4 GB download of Deepest Sender(!) (must try using it again with new blogger and Firefox) - fortunately the 4GB was soon downloaded!
Posted by rajm at 8:37 pm No comments:

local authorities would be empowered to check on the living conditions of citizens from other EU nations before granting them right of residence. The measure appeared to be aimed at Roma living in encampments, and particularly at the estimated 50,000 Romanian Gypsies who have entered Italy in recent years and who are being blamed for much of the recent rise in crime rates.

No word on Mr B's attitude to the law then?

In addition, the cabinet agreed to the confiscation of property let to illegal immigrants,

so make them invisible and a separate race which can safely be carted away in cattle trucks?

In Naples last week, a Roma camp was repeatedly attacked following the arrest of a young Gypsy woman accused of trying to abduct a child. After the inhabitants had been moved for their own protection, the buildings and caravans were burned to the ground, apparently by vigilantes acting on orders from the Neapolitan mafia, the Camorra.

Fortunately I was there before the change of government, at the moment I see no reason for returning.
Posted by rajm at 10:46 pm No comments: May
Originally uploaded by rajmarshall
And another picture of may blossom - this time on the way to work. Intended to take this picture for a few days but always been too rushed - this morning I got around to it.
Posted by rajm at 8:36 pm No comments: garden twilight
Originally uploaded by rajmarshall
of a friend. Sometimes the internet is tough and tells you things you'd rather not have known. Was listening to Mahler's Der Abscheid earlier too..
Posted by rajm at 9:51 pm No comments:

especially you - the gentleman in the rear pew!
from ASBO Jesus
Posted by rajm at 11:12 pm No comments:

You will turn off your mobile

won't you? - on entering a shopping centre.
Posted by rajm at 8:08 pm No comments:

on seeing this news - sounds pretty good to me!

are you my mummy?

somehow sounds appropriate for this evening
Posted by rajm at 8:05 pm No comments:

and another Ubuntu upgrade oddity!

Following on from this collection, I've just noticed this


so I'm connected wirelessly through eth1 (I am honestly!) but it can't see any wireless access points. Pardon!?
PS - all explained now - you need sudo iwlist eth1 scanning
they've tightened up permissions on scanning for wireless connections. Not too surprising when you think about it.
Posted by rajm at 1:35 pm No comments:

Hurrah for the Church of England Women clergy!

In an outspoken statement sent this week to all bishops in the Church of England, nearly half of all licensed women clergy called for no further delay on women bishops, but also, for no further discrimination written into the legislation.

read the statement here I shall see if there's any comment this weekend - especially if I'm in the group which gets to hear the bishop on the Anglican future!
Posted by rajm at 12:15 pm No comments:

The xkcd cartoon on the ssh security hole is here!
Posted by rajm at 12:13 pm No comments: may
Originally uploaded by rajmarshall
Just to record that the Summer Walk season has started and that pictures from the first one are here and that it looks as if next week's won't quite be as advertised!
Posted by rajm at 11:08 pm No comments:

I blogged a bit back about upgrading and installing Ubuntu's Hardy Heron and Mandriva 2008.1. I rather passed over the Ubuntu upgrade but as some issues have appeared, I'll make some comment just in case anyone else has these issues.

Forty years ago..and having been working my way gently through a book of photography I was stopped by a photograph of Gilles Caron, this one - see page four of that album. Another album is here. Caron went missing in Cambodia at the age of 30...
Posted by rajm at 5:09 pm No comments:

I realised that it’s the C++ of wikis — not only will it not solve your problems, it will cause new ones that will make you long for your original ones. observant
Originally uploaded by rajmarshall
Biscuit - next door's elderly cat - was closely observing something. More cat photos from this hot May afternoon added on my flickr pages...
Posted by rajm at 4:06 pm No comments:

appears to be wending its way around the blogosphere.
Me last Friday...?
Hat tip to Little Bang Theory
Posted by rajm at 10:32 am No comments: 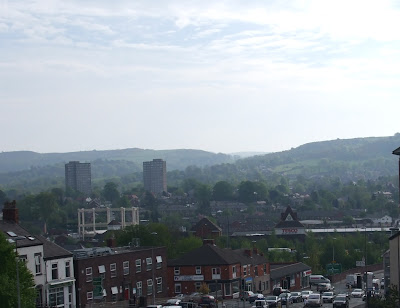 Suddenly the trees are out (at least I've noticed them) and the ex-industrial wasteland over towards Tesco looks leafy and attractive.
Posted by rajm at 8:29 pm No comments:

more cat pictures.
But maybe you've already seen this...
Posted by rajm at 5:37 pm No comments:

Getting sound to work

Just a (I hope only one!) postscript to this experience of a Mandriva install. I rebooted this morning and found that amarok was no longer working

xine was unable to initialize any audio-drivers

It was working before the reboot so I assume something since the reboot before that (dvd encryption?) broke it. I eventually went into the Audio settings and disabled anything associated with Pulse Audio and that appears to have sorted it!
Posted by rajm at 1:32 pm No comments:

I installed Ubuntu's Hardy Heron on a replacement machine at home, that seemed to go pretty well and so on Friday I upgraded to the same distro (from Gutsy) on my work laptop - there was one point where it claimed that the download would take 10 hours - we do have a rather fast connection to the internet at work! - but that went pretty smoothly apart from the upgrade installing oodles of games which weren't there before.
So today I decided to go for a few more! To replace a old machine with the new Ubuntu machine - migrating the data and then to do a fresh install of Mandriva 2008.1 on the webserver. All did not go smoothly!

Seemed to go with only slight difficulty, however I then moved upstairs to get the web server done...


I hope these permutations prove useful to someone!
Posted by rajm at 10:34 pm No comments:

I was meant to be playing three pieces at the Alderley Edge festival later this month - the last movement of a Haydn sonata, Scriabin Op 2 No 1 Etude and the Grainger/Gershwin Love Walked in - but I've double booked the weekend and I need to be at a conference 50+ miles away so I don't think sneaking out will be possible - grrrr (though the Haydn is still rather ropey!)
I do have - though the score of Poulenc's Embarquement pour Cythere -

sticking out the tongue camp!
Posted by rajm at 8:28 pm No comments: 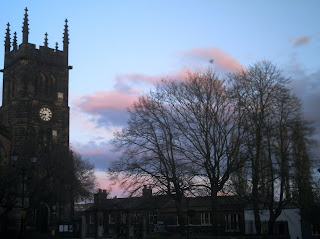 meant to take a photo of the sunset coming off the train but was too rushed - so this will have to do!
(we celebrate two half-birthday's on May 1st!)
Posted by rajm at 9:05 pm No comments: