This week's free word associations from Unconscious mutterings are:
Posted by rajm at 9:44 pm No comments:

This week's free word associations from Unconscious mutterings are:
Posted by rajm at 11:35 am No comments:

This week's free word associations from Unconscious mutterings are:
Posted by rajm at 7:19 pm No comments:

This week's free word associations from Unconscious mutterings are:
Posted by rajm at 10:26 pm No comments:

I wrote something for work about my recent trip to Prague for a Linux Embedded conference. Here's a slightly augmented version with more pictures and restaurant locations! 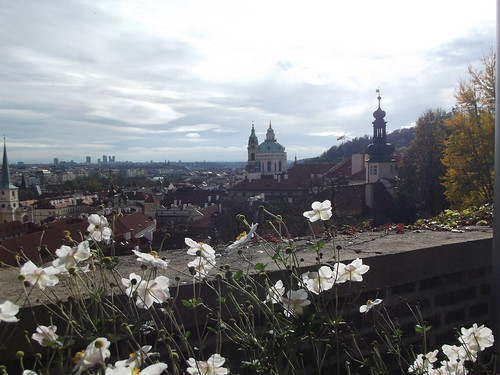 A number of us have returned from ELCE last week in Prague, some of my
thoughts follow:

Most of my time was devoted to participation at the CIP booth and demos
of the board-at-desk software. Sunday was mainly occupied setting up
those demos, Agustin & I did a talk through of b@d to CIP folk with a demo of
the software. We'd intended to run a tutorial of installation of the
application but - in view of networking issues on the conference wifi -
it was just as well that this was cancelled. It was good to meet some
of the cip folk who had only previously been IRC nicks. I expect the
tutorial will eventually be presented here as well as being made
available to a wider non-Codethink audience. We had lunch at a Veggie restaurant Mlsná kavka close to the Hilton where the conference took place. The restaurant's 'about' page is worth a read on their social concern. In the evening we ate at Zlaty Dvur in the old town, live jazz but the food was ok but not great.

Monday was spent making sure the demo worked at the booth - fortunately
my accommodation was close to the conference so I could return & use
that wifi and rule out any unhelpful things that the venue was doing to
the network. In the end I had to use my phone as a wifi hotspot in order
to demo successfully. In the evening I ate at La Boca a Spanish/Argentinian eaterie where I also had a couple of breakfasts as I wasn't staying at a hotel.

On Tuesday a CIP talk where it was good to see our afternoon's demos
advertised on a slide - someone was obviously paying attention to my
emails that morning!
Then heard 'Introducing the “Lab in a Box” Concept with Patrick Titiano & Kevin Hilman
a different approach to the work on board
at desk - I could see that both are useful.

At lunchtime there was a CIP developers meeting - a rather undersized
room for those that wished to attend. Discussion of the 4.4 kernel not
going beyond 2038 and a general introduction of the developers to each
other.

I attended the 2 Codethink talks - Ben Dooks Open Source Neuroimaging
and Ben Hutchings & Agustin on long term maintenance of Linux kernels
both of which got good numbers and seemed to be appreciated. 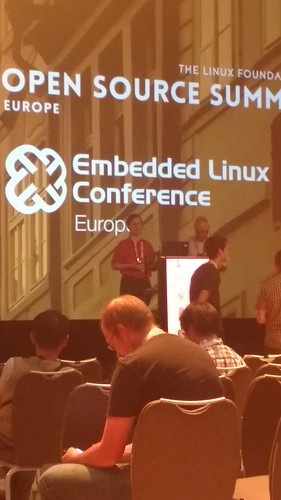 The rest of the
afternoon was spent demo'ing, the software behaved itself and I had a
fairly steady stream of small groups to talk to.

If in Prague, beware of restaurants which don't take cards - Ben D and I
ate at one that evening - we paid in a mix of euros and Cz krone! This was U Bronců I ate here twice so I enjoyed the food despite the paying arrangements.

On Wednesday I got to 2 Keynotes: Challenges in Industrializing OSS and
How Siemens Tackles Them - Jan Kiszka some interesting commitments of
Siemens to Open Source - having worked elsewhere in Siemens a few years
ago this was good to hear publicly though I suppose it's not really news.
Then Dirk Hohndel interviewed Linus Torvalds - a pg presentation so he didn't
get to give his views on c++.

I appreciated the paper copies of the conference schedule in place of
the dreadful e-timetable the web provided.

Eventually I saw bits of Prague in daylight and finally assisted Daniel Wagner
with a partial installation of b@d on his laptop.
The conference buffet was in a strange rabbit warren of a historic Prague building
but it soon became far too noisy and a group of us retreated to a coffee
house / book display Ouky Douky on the other side of the Vltava. 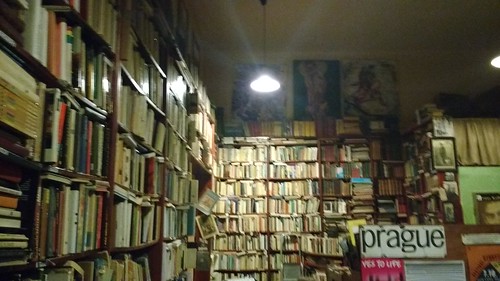 (not a good photo apologies!)

The full photo album for the trip is on flickr.

Next year's ELCE will be in Edinburgh - I expect there'll be even more of a Codethink presence!
Posted by rajm at 3:26 am No comments: