I've made the plunge and upgraded to Terragen 3 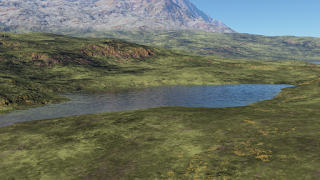 here's a render where I rather like the outcrops. I was trying to get some stones in the foreground but seem to be failing, there are though some nice tutorials with the new release I will have to dive into! I commented a few weeks ago at the slowness when running this windows app under linux with wine, this slowdown isn't quite so bad when running on a 64 bit Ubuntu installation, I'm not sure whether this is the 64 bit terragen, wine or the base operating system that's responsible for the better performance!
As a later comment it would appear that most of the slowdown was due to a PassThruSvr.exe process - investigation revealed this .exe had nothing to do with the ordinary running of wine but was something I must have installed when I was trying to configure my old HTC phone. I renamed the file and renders ran rather more quickly!
Posted by rajm at 8:43 pm